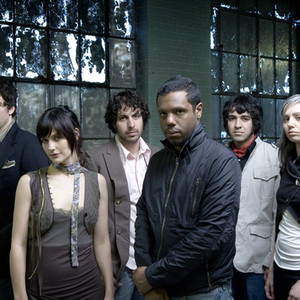 Without even seeing a performance by The Dears it was easy to recognize the group in Montreal's haunts in the late nineties. Dressed in black suits and white shirts, they would descend on bars like the minor legends they were. At that time, The Dears were like an unconfirmed rumour of ardour; they were full of possibility, and propelled by passion, alienation, and alcohol. Their precious name and the crooning vocals of charismatic front man Murray Lightburn, defined their clean, symphonic pop style. Yet the band's onstage intensity and quiet defiance defied easy categorization. Already, at that early stage, their sophisticated content and attitude set them at odds with the music scene of the day.

End of a Hollywood Bedtime Story, their 2000 debut album, immediately established The Dears as a unique and powerful presence. With a stylized and cinematic scope, the record fused narratives, orchestral arrangements and pop in a way that was praised for ambitious grandiosity. The Dears, now Lightburn with keyboardist Natalia Yanchak and joined by drummer George Donoso III and bassist Martin Pelland, exhausted themselves on a seemingly endless schedule of grueling tours. Kids from Sudbury to Vancouver bought tickets and T-shirts and came out from winter's shadow to experience the band live. They toured more. Band members quit and replacements were found. They endured their initiation into the divided and limited realities of national critical success and kept to themselves.

By 2001 The Dears ceased to be a rumour; they were real and dark -- almost too real and too dark for a Canadian music scene that banked on fluffy love songs and slick indie hits. The 2001 EP, Orchestral Pop Noir Romantique, seamlessly melded Lightburn's neoromantic songwriting to an imaginary film noir soundtrack. And in the EP's ironically titled ?Autotomy,? a bleak lover's dirge that describes Montreal's decrepit physical, economic and political landscape, The Dears fashioned the greatest love song to the city ever written.

The second EP, Summer of Protest, released in 2002, expanded the apocryphal vision seeded on Orchestral Pop Noir Romantique. Lightburn's white shirt and black suit were long gone, replaced for a military helmet and loudspeaker. Music writer Stuart Berman's synopsis of SOP as ?a harrowing mini-concept album that rolled operatic hysteria, ominous post-punk rumbling and cosmic Christmas music into a soundtrack to the end of the world? could not be more accurate. Little can be added to Berman's description, except that while the 2001 Quebec G8 summit protests and the events of 9/11 had barely registered thematically in indie-rock, The Dears, it appeared, were not content with catchy love songs.

The Dears' performances evolved into part nihilistic Charlie Brown special and part Brechtian theatre. The drama of their live shows forced audiences to examine the dark forces at work in their nations and hearts. Bizarre, hopeless, entropic and devastating were the only words one could use to describe hearing and seeing The Dears onstage in 2002. You didn't watch or listen so much as get assaulted by music. You had to be in the right headspace: you had to be either completely inebriated or sickeningly sober. It was uncomfortable and simultaneously beautiful in its plain and painful truth. In 2002, with Lightburn barking revolutionary orders into a megaphone, it was easy to believe that The Dears were the most artful, revolutionary pop band in Canada. It was becoming a challenge to see the future path of their commercial success.

With the 2003 release of No Cities Left, The Dears gained the success that End of a Hollywood Bedtime Story had promised. The album was rife with The Dears' dystopic world view, but was also curiously luxuriant, poppy and brimming with hope: ?Our love, don't mess with our love,? the male and female warn, playfully, in the album's single, ?Lost in the Plot.? The doom and gloom that pervaded their earlier work was traded for optimism evident in songs like the ironically lighthearted ?Don't Lose the Faith? and ?Never Destroy Us.? No Cities Left brought Lightburn's finely crafted songwriting to the forefront and was exulted for both its commercial and artistic appeal.

The Dears were nominated for Best New Group at the 2004 Canadian Juno Awards, acclaim followed by New Musical Express' naming The Dears as ?Probably the Best New Band in the World.? Soon after, NME cited NCL as the 10th best album and the band found itself on several Best New Band features in music magazines from Rolling Stone to Stuff to Spin. After invitations to open for Morrissey in Toronto and Los Angeles, The Dears played Glastonbury (UK) in 2005, and British fans and critics welcomed the band's mercurial implosion into their music scene with open arms.

When they came home, to Montreal, in the summer of 2005, Natalia Yanchak and Murray Lightburn were married, a gesture that formalized their decade-long partnership. Despite the stresses and upheavals of the music industry the tight-knit band -- whose lineup of Murray Lightburn, Natalia Yanchak, George Donoso III, Martin Pelland with flautist and keyboardist Valerie Jodoin-Keaton and guitarist Patrick Krief -- had always been close. Now it was official: The Dears were family.

Moving from grinding guitar solos to ethereal vocals, there is no other way to describe Gang of Losers than as a celebration of beautiful losers. The theme of ostracization, at all levels of society, dominates this eclectic yet thematically cohesive album. It's impossible to miss Lightburn's slick references to white-liberal guilt. Barely disguised in the song ?Whites Only Party,? with its cabaret casualness, the thorny subject of race resurfaces, full-blown, in the jazzy, rootsy, epic finale, ?Find Our Way to Freedom.?

Social class and indie rock cool are also a pre-occupation in Gang of Losers: ?I hang out with all the pariahs,? Lightburn drawls in the jumpy ?Ticket to Immortality.? Bluesy and ballad-laden, with rolling pianos and horns, the album features the seductive fusion of Lightburn's onstage vocal range and studio precision. Recorded without punch-ins or edits, the band played every song from beginning to end in order to capture the technical unity of their live shows.

Gang of Losers is a classic Dears album in terms of its complex musical and thematic range, veering from instant pop hits to oppressive ballads to lullaby show tunes. But what's most remarkable about Gang of Losers is that within the complicated lyrical and musical scheme, Lightburn's humour and humanity shine through the heavy-handed themes. In the end, forgiveness, of the self and the other, wins. ?I need this song,? Lightburn wails in ?Find Our Way to Freedom,? relenting, as he exchanges hate for love and mercy. And we need these songs, this album, too: if only to counter the world's indifference, and soothe the inner loser that thrives on all our worst fears.

End Of A Hollywood Bedtime Story