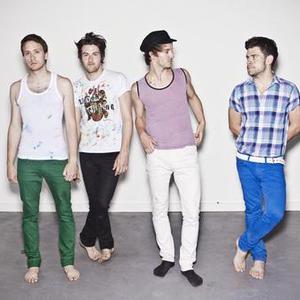 The Holloways were an indie rock band which formed in London, England in 2004 and much to fans dismay, split in 2011. The band's final line-up consisted of David "Alfie" Jackson (vocals, guitar), Bryn Fowler (bass) and Edwin Harris (drums). The Holloways, having a rest after touring the UK 2010. Alfie, (see pix) chanced his arm on DJ deck's and span some funky tunes & shook a leg-with 7'3' fine artist Pandemonia, at Zoe Griffin Christmas bash at 5 star Montcalm Hotel, Marble Arch, London.

In the early months of 2009, Alfie and Bryn were busy recording additional new material to kick-start the year. By April they decided to start actively seeking new members and as luck would have it, in the very first rehearsal they found guitarist Mike Baker, who - after playing just one song with the band - had done enough for Alfie and Bryn to make up their mind. The following day Edwin Harris set up his drums and did a quick warm up and before even playing a song, the decision again, was easy. Luck had clearly swung back in The Holloways' favour and a new lease of life took the boys into the studio for a couple of hectic weeks before doing a few gigs and recording 3 brand new songs and they're back doing what they do best - playing music.

2008 had been soul destroying for the band. Much conspired to prevent full scale releases of the exciting new material recorded at the legendary Sawmills Studio. The biggest setback was the long, drawn out legal battle across the pond involving their stateside former label TVT.
The darkest hour before the dawn came in December with a lot of smoke as The Holloways' home - Nambucca - caught fire. Much was lost in the fire - practically everything. This was the final straw for Dave and Rob who felt the end had come with nothing seeming to go the band's way. However, the founding members - Alfie and Bryn - felt the previous 3 years of good fortune by far outweighed the 12 months of bad fortune; and having weathered the storm, they concluded "2009 has to be good. Yin and yang and all that." - The sun doesn't always shine indeed.

The Holloways had an exciting start to life with the critically acclaimed debut - "So This Is Great Britain?? - and 2007 saw the band storm sold out shows across the UK with singles Dance Floor, Generator and Two Left Feet pumping on the radio airwaves.
Now, the energy and the bond in the band has seen the boys enjoy an intense schedule which is already relighting many fires ahead of the release of the new album ? No Smoke, No Mirrors ? which is due for a September release.
Everyone is massively excited for the summer schedule; the boys will be back on the road gigging the brand new set featuring songs from the forthcoming album alongside the classic Holloways favourites.

No Smoke, No Mirrors

So This Is Great Britain