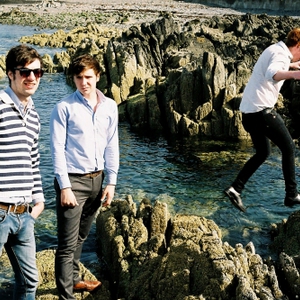 Two Door Cinema Club are an electropop/alternative band from Bangor and Donaghadee, Northern Ireland, United Kingdom formed in 2007. The band consists of Alex Trimble (vocals, guitar), Kevin Baird (bass, vocals) and Sam Halliday (guitar, vocals). The band does not have a permanent drummer, but they have been touring with drummer Benjamin Thompson. The band's name came about after Sam mispronounced the name of the local cinema, Tudor Cinema, and it stuck.

The band's name came about after Sam mispronounced the name of the local cinema, Tudor Cinema, and it stuck.

They are signed to French record label Kitsun&eacute; Music, through which they released their debut album Tourist History on 1 March 2010. In December 2009, Two Door Cinema Club were featured in the BBC's Sound Of 2010 Poll, which was decided by 165 British "tastemakers".

Their debut album "Tourist History", released in March 2010 was preceded by the singles "I Can Talk" and "Undercover Martyn", and "Something Good Can Work" was released in May 2010. The band then released "Come Back Home" in July 2010, a rerelease of "I Can Talk" in October 2010, and "What You Know" in February 2011.

In June 2012 the band announced their second album, Beacon, which will be released in September 2012. Beacon's first single, Sleep Alone, was released in July 2012.