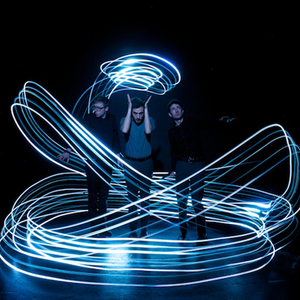 Delphic are an electronic/indie three piece that aims to be the future sound of Manchester, by mixing euphoric electronica with anthemic songs. The group who formed in 2009, is made up of James Cook (vocals and bass), Matt Cocksedge (guitar) and Richard Boardman (synths). They are also accompanied by Dan Hadley on drums. Delphic released their first single This Momentary in 2009 on the french record label Kitsun&eacute;.

Delphic released their first single This Momentary in 2009 on the french record label Kitsun&eacute;. The last few months of 2009 were good months for Delphic they had their first TV appearance on "Later... with Jools Holland", the video to "This Momentary" was nominated for 3 UK Music Video Awards and they were also nominated for the "BBC's Sound of 2010 list" in which they came third.

The Start of 2010 brought a sell out UK tour and it saw the release of their debut album Acolyte which was released in the UK on 11th January, and entered the UK album charts at #8. In March Delphic released their fourth single Halcyon on Polydor records.