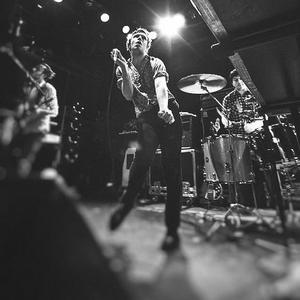 Friendly Fires are an indie band formed in 2006 in St Albans, United Kingdom. They consist of Ed MacFarlane (vocals), Edd Gibson (guitar) and Jack Savidge (drums). The band released their self-titled debut album on 1 September 2008. It contains the singles "Paris", "Jump in the Pool", and "Skeleton Boy". The band's second album, "Pala", was released on 16 May 2011. According to the Pala Songfacts, the title Pala is a reference to the doomed utopia of English writer Aldous Huxley's novel Island.

Published in 1962, it is the account of Will Farnaby, a cynical journalist who is shipwrecked on the fictional island of Pala, where parrots whisper uplifting messages to the islanders.

Formed out of the ashes of First Day Back, the St Albans, United Kingdom hardcore band they formed while still at school, Friendly Fires make razor-sharp post-punk that burns through the memories of all the dismal, skinny jeaned ?80s revivalists you've been hearing these past few years. Sounding brittle, knotty and urgent, Friendly Fires are the real deal. With no fat or padding on them at all, their songs possess an elegant sparseness. As guitarist Edd Gibson notes: ?The hardest thing I think is to know what to leave out, to know when something is enough.? But amongst all the stripped-back twists, there are also moments full of deep, blissed-out melodies. ?I love lush, massive, tingly chords; the My Bloody Valentine sound,? says bassist and singer Ed MacFarlane.