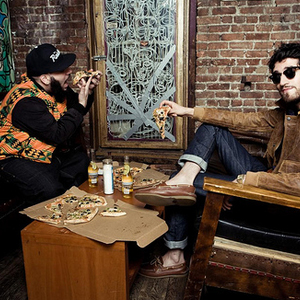 Chromeo is an electrofunk duo based in Montreal, Canada and New York City. They are P-Thugg (Patrick Gemayel) on keyboards, synthesizers and talk box, and Dave 1 (David Macklovitch) on guitar and lead vocals. The two were best friends since childhood and officially formed the band in 2002. They describe themselves as the only successful Arab/Jewish collaboration since the beginning of time. David Macklovitch is currently earning his Ph.D in French literature from Columbia University, where he also teaches undergraduate French classes.

David Macklovitch is currently earning his Ph.D in French literature from Columbia University, where he also teaches undergraduate French classes.

Their second album "Fancy Footwork", produced by Chromeo themselves with the help of Tiga and mixed by Philippe Zdar from Cassius, was released on June 26th, 2007.

The album took them on a two-year world tour performing in festivals such as Glastonbury, Reading and Leeds in the UK, Fujirock in Japan, Iceland Airwaves in Iceland, Pemberton Music Festival in Canada and Coachella, Bonnaroo, Rothbury Festival and Lollapalooza in the US.

Chromeo contributed to K7's mixed series titled DJ-Kicks: Chromeo. In summer 2010 the track ' Fancy Footwork' was used as the sound track for a VO5 Extreme Hair Gel advertisement in the UK. The YouTube video of the original release in 2008 had over 666,000 hits by late July 2010.

At the beginning of March 2011, Chromeo sent out notice that it had recorded the "world's smallest album," entitled Drive Time, which consists of 55 songs in only 183 seconds. About a week later, it was revealed that Drive Time is actually a free musical Nokia Own Voice satellite navigation pack for Ovi Maps, made for usage with Nokia's compatible cell phones. A red vinyl 5" single consisting of regular, instrumental and a cappella versions of "Turn Left" and "Follow" was released to promote it, with a sticker on the shrink wrap saying that it was a numbered limited edition of 40 copies.

Trivia:
Guitarist and lead singer David Macklovitch is the older brother of A-Trak (Alain Macklovitch), who in 1997 was the youngest-ever winner of the DMC World DJ Championship and is currently Kanye West's tour DJ.

Macklovitch is currently earning his Ph.D in French Literature from Columbia University.

Don't Turn The Lights On (EP)