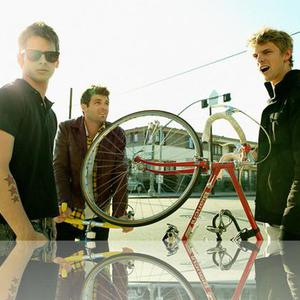 Foster the People is an indie rock/indie pop band that formed in Los Angeles, California, United States in 2009. The band consists of Mark Foster (vocals, guitar, keyboards), Cubbie Fink (bass, vocals) and Mark Pontius (drums). The band released their debut self-titled EP in January 2011. The band's debut full length album, Torches, was released on May 24, 2011 on Star Time/Columbia. Their first single "Pumped Up Kicks" was a sleeper hit during the summer of 2011 and peaked at #1 on the Billboard Alternative Songs Chart, #3 on the Billboard Hot 100 and #18 on the UK Singles Chart.

Initially the solo project of Mark Foster, he later added Fink and Pontius in 2009, forming a full band in the process. Two other musicians, Sean Cimino (guitar, keyboards, vocals) and Isom Innis (keyboards, vocals), tour with the band as additional members.

Go to www.fosterthepeople.com and join their email list if you want to get involved or just want a free download of "Pumped Up Kicks"!

In The Darkest Of Nights, Let The Birds Sing