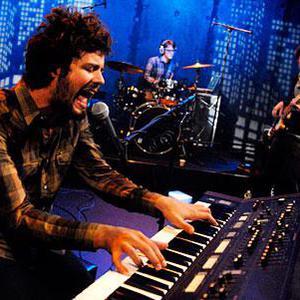 Passion Pit is an electronic band which formed in Cambridge, Massachusetts, United States in 2007. They consist of Michael Angelakos (vocals, keyboards), Ian Hultquist (keyboards, guitar), Ayad Al Adhamy (synth, samples), Jeff Apruzzese (bass, keyboard) and Nate Donmoyer (drums). "Passion Pit" was a vocabulary word used in a class Mike took in school. It's a slang word for a drive-in movie theatre where kids used to go to make out.

Passion Pit's Michael Angelakos has revealed that the band's new album sounds so "beautiful" that they want to release it "when the buds start to bloom" next year. The Take a Walk Songfacts says the first single, "Take a Walk," finds Michael Angelakos singing of family financial struggles.

Michael played his first show alone sitting with his laptop and a microphone. Later, Ian approached Mike and asked him if he wanted to start a band. After a few line-up changes, Passion Pit was born.

The band's debut Chunk Of Change EP originally had four songs and was recorded by Angelakos on his laptop. It was intended as a belated Valentine's Day gift to his girlfriend. This set of songs was passed around Emerson College, where Angelakos was attending and caught the attention of many blogs. It was then released on September 16th, 2008 on Frenchkiss Records with two extra songs. The band's debut album, entitled Manners, was released on May 19, 2009.

The song Sleepyhead contains samples of the song "Oro Mo Bhaidin" by Irish harpist Mary O'Hara. This song has been used in a US advertisment for the Palm Pixi, Canadian PSP advertisement, Little Big Planet 2, MTVs 'What the Flip?' campaign and the television shows, Skins and Gossip Girl.

Passion Pit made their television debut on Late Night with Jimmy Fallon on Wednesday July 29, 2009 performing their song "The Reeling" from the album Manners.