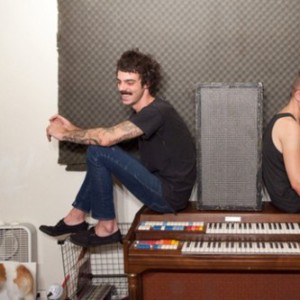 Gauntlet Hair is a relatively unknown pair of dudes who are named Andy and Craig, now residing in Denver, Colorado. The pair garnered a fair amount of attention after being part of the Rhinoceropolis-curated block of Denver-based bands that played at the post-SXSW Mexican extravaganza MtyMx. The band's track "I Was Thinking..." is a pretty insatiable guitar stomp that throws some R&B and soul into the lo-fi revival pot, mixing heavily-reverbed guitars with a simple, but undeniably booty-shaking beat.

Add in some Animal Collective-style vocal melodies and you've got something pretty fantastic. The track showed up on Denver producer Pictureplane's MtyMx mixtape, which you can grab here, but no other release info is currently available.