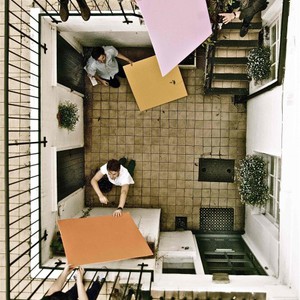 Indie, On The Radar, Rock

Sometimes you have to delve deep among the roots of a band to truly understand where they sit today. And searching for the origins of Brighton five-piece Cave Painting requires a burrow into their previous incarnation ? a learning curve they wouldn't be so fully formed or layered now without having experienced (and cast off). So it was that singer Adam Kane, keyboard player Sam Simon, guitarist Harry Smallwood...

?
This group of friends soon hit on something that felt right ? but not quite right quite yet. ?It was... focused on the live show,? Rich explains of the first band's untethered, frenetic sound. A moderate amount of ears were pricked, tours undertaken, a brief froth of hype. And then things changed. Or rather, they grew.
?
?We'd written some new songs, and our previous manager didn't like them,? laughs Rich. ?He gave us an ultimatum,? adds Adam. ?It was, ?Do it the way I think you should do it, or that's it.? And so, that was it. ?It' being the real birth of Cave Painting. This new batch of songs saw them shedding the more immature clatter of that first band into something more epic, confident and classy. They locked themselves in Brighton's Electric Studios, where a couple of them also worked on and off to pay the bills. Over a period of six months away from sunlight, something special blossomed. ?We just learned about atmosphere,? Sam sums up, succinctly. ?We just had the rest of the day after working until 11am to have fun.?
?
?We had a new kind of freedom,? agrees Adam. ?Yeah,? adds Sam, ?this love for what we were doing ? and over six months we wrote without any intentions of really doing anything. We weren't trying to get a deal.?
?
Which is always the best attitude to have towards taking forward steps to success ? and they didn't need to grasp after anything. By the time Cave Painting announced their first live show, at London's The Social in April 2011, demos had been fizzing around the inboxes of the movers and shakers of the capital's industry bigwigs, and the venue was packed to the rafters, ?One of the guys we work with looked at the guest list on the way in,? remembers Sam. ?One of our mates heard him say, ?Jesus, if they screw this up... that's it.?
?
But there was no screw up. And after storming that show, Cave Painting were soon on the road that saw them firming up a deal with Third Rock Recordings, the label set up by former Parlophone MD Keith Wozencroft, the man who signed Radiohead and built a roster that included Sigur Ros, Gorillaz, Coldplay, Kylie and LCD Soundsystem.
?
A path was outlined, and in November 2011 after trying out a few producers they settled on Barny Barnicott, (Artic Monkeys, Kasabian) and at his Bluebell studios in Kent they crafted ?Votive Life' ? Cave Painting's debut album, set for release in the Autumn.
?
By this point the band were well honed and slick ? and the album was in the bag within two months, no dramas, and acted as a slingshot into a UK-wide tour with Alt-J as well as a slew of their own headline shows.
?
Touch-points those who witnessed the shows were the bands who straddle the line between unashamedly epic and delicately deft ? and it's always the finest of lines. All members of Cave Painting love The National and Arcade Fire ? stuff that feels right in front of thousands, a strong enough pull for the masses, but with no compromise, nothing sold-out, and nothing lost with the expansion. ?It's about riding that line of epic-ness,? agrees Sam. ?But it's not something that we've specifically set out to do. We haven't really set out to do anything.? It's natural. There are droplets of a number of possible influences bubbling and rising in album opener ?Leaf', subtle Wild Beasts-esque flurries in ?Gator', shadows of the hum and glow of ?Neon Bible'-era Arcade Fire cutting through ?Only Us', but everywhere a no-bullshit uniqueness, the niggling feeling that you've never quite heard anything like this before.
?
And it's this that will cut Cave Painting apart from anything else you will hear this year.

A band born of almost accidental greatness and ambition. No grand statements, no game plan, no nut job back stories ? just a king's wealth of music that glows with beauty and vision.
?
And sometimes that means more than anything else.
?