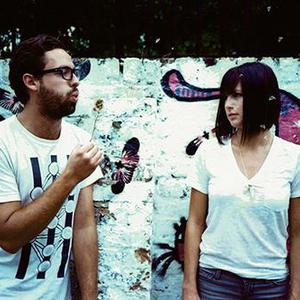 Phantogram is a trip-hop/psych-pop duo which formed in 2007 in Saratoga Springs, New York, USA. The band consists of Sarah Barthel (vocals, keyboards) and Joshua Carter (guitar, vocals). Their music can be described as a culmination of unique street beat rhythms, psychedelic melodies and organic textures. The band practices and writes music in an out-of-town farm called Harmony Lodge. The group name was inspired by the optical illusion called phantogram.

Barthel and Carter were friends since junior high school. Barthel pursued a visual arts degree while Carter formed the experimental band Grand Habit. In the summer of 2007 they reunited and worked on finishing some beat ideas Carter made earlier. The duo was originally called Charlie Everywhere when performing around the Saratoga Springs area on the local label Sub-Bombin Records. When they signed to BBE Records they changed the name to Phantogram, to avoid legal issues.

In March 2009, they self-released a five song EP, Phantogram EP, which featured four songs that ended up being on the full length. In the same year they released another EP, Running from the Cops on BBE Records.

The band's debut album Eyelid Movies was released in September 2009, on BBE Records in Europe, and in February 2010, on Barsuk Records in the US. The album received generally favorable reviews. The singles "Mouthful of Diamonds", "When I'm Small" and "As Fas As I Can See" supported the album.

Phantogram have supported acts such as Metric, The xx, J-Live, Brazilian Girls and have toured with The Slip, Zero 7 and Minus the Bear.

In 1 November 2011, the band issued the EP Nightlife. This EP includes the single "Don't Move".

In A Spiral (CDS)

You Don't Get Me High Anymore (CDS)