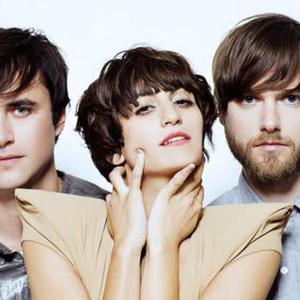 Dragonette are a part-Canadian part-British electropop music band. They are currently signed to Mercury UK. They originally formed in Toronto, Canada in 2005. The band is made up of Canadian singer Martina Sorbara, her husband Dan Kurtz, a Brazilian that has lived in Canada since he was 4 years old, Joel Stouffer and Will Stapleton (who replaced original guitarist Simon Craig following the band's move to London).

The band is made up of Canadian singer Martina Sorbara, her husband Dan Kurtz, a Brazilian that has lived in Canada since he was 4 years old, Joel Stouffer and Will Stapleton (who replaced original guitarist Simon Craig following the band's move to London). Martina is a successful singer-songwriter in Canada, and Dan Kurtz a member of the popular livetronica trio The New Deal. Martina's father is Greg Sorbara, Ontario's Liberal Finance Minister. Martina has since referred to the work she produced as a solo artist as "tampon music".

All of the band members, with the exception of Will Stapleton (born in London), are from Toronto, but now they all live in West London. Originally called "The Fuzz", the band's first gigs were touring the USA as support act for Duran Duran. Since then the band have gone on to support other major UK acts including New Order, Basement Jaxx and the Sugababes. They have recently completed a series of headline gigs in small venues in the UK and Canada, and performed at the Glastonbury Festival 2007. Prior to signing their record contract, the Dragonette (EP) was independently released as promo only and the songs have gained the attention of many critics such as the popular music blog Popjustice where they were named the #1 pop act to look out for in 2007. The band share management with the Scissor Sisters.

On Thursday, February 08 2007, the video for the track "Jesus Doesn't Love Me", which was filmed in December 2006, leaked onto the internet, through the website MySpace and also Popjustice. The video has since been removed from MySpace, as it was not intended to be viewed at this point in time. A 'taster' of this video is currently available to watch on the band's official YouTube page.

In early February 2007 the band flew to Toronto to shoot a music video for their first single I Get Around. The single was initially set for release on 16th April. The date was later pushed back to 30th April. Despite heavy promotion from the band, it entered the UK singles chart at a disappointing #92. Many have attributed this to confusion as to when the single was actually released (at one point there were three conflicting 'release dates'), others claim it simply was not stocked in record shops anywhere outside of London. Also, the fact that I Get Around was at one time available to download for free from the band's website (back in 2005), and was previously released as part of the compilation album "Robopop" (back in 2006)], certainly did nothing to help its performance as a hit single in 2007.

In May 2007, the video for "Take It Like a Man" was leaked onto YouTube before the band had a chance to release it themselves. The second single was released on the 23 of July 2007. Their second single was another commercial disappointment, debuting at #122 on the UK Charts. Around this time a new track was sent out to DJs around the United Kingdom, a cover of Calvin Harris's single The Girls. Dragonette's version however, replaced the lyrics with "The Boys" - a re-working they had previously performed at London's Gay Pride 2007. On the promo CDs was written "Dragonette have something to say to Calvin Harris!" The song was leaked onto the internet. Later, a fan-video from YouTube appeared on Perez Hilton's famous blog. The song was also featured during a Nikki Hilton fashion show.

Galore was made available to download through the UK iTunes store on August 20, 2007. It was physically released on September 24 in Europe and Japan, and on the following day in Canada. The album reached #80 in the Canadian charts but failed to chart in the UK.

Live In This City (CDS)

I Get Around (Inc Instrumental

I Get Around CDM