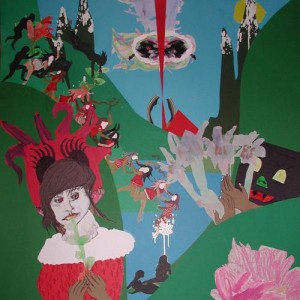 The GANGI duo are Time Travelers, taking from the past and the future and inventing new genres in today's space-time... across history forward and back, and it's all levy, as present is, but said that way, one states... a different space-time. GANGI's music is a bit disorienting, spanning across these many different genres... a fact they blame on all the bright lights and industrial / informational noise they encounter and we are all surrounded with as we go about our daily business in these post info age times.

GANGI takes almost every aspect of their music production upon themselves at the Office of Analogue and Digital in the suburbs of Los Angeles.

Matt Gangi self-released their debut recording A on the Office of Analogue and Digital (OOAAD) (later released on vinyl by White Noise). The album was recorded, written, performed, and produced by Matt Gangi alone in a toxic, rent stabilized Brooklyn bedroom with poison mushrooms poking through the ceiling plaster.

Gangi relocated to California after several national tours with Lyle Nesse (who is now teaching English in inner-city Baltimore) and started touring and recording with his old friend, drummer, multi- instrumentalist and fellow experimentalist, Eric Chramosta. Together they have continued in a DIY no-wave vein and self-produced, engineered, and recorded hundreds of recordings.

The first collection of these is entitled gesture is. The album was recorded at the OOAAD in Glendale, California. Since recording A, Matt started building and modding analogue equipment for the OOAAD... circuit bending, redesigning, building circuits, and combing dried-out-lawn garage / estate sales looking for old analogue electronics to fix and repurpose components from...The duo fixed up found mixers, compressors, a 1/2" tape machine (among building other oscillators and equipment)... which they use for sounds on gesture is and their current live show.

Matt Gangi and Eric Chramosta drag in a thousand genre sources that can shift without notice within the same song, then they rain it down with ambient/ musique concr?te effects atop decidedly psychedelic broadcasts and an otherwise ethereal big-beat pop, appropriating themselves and other transmissions with samplers. As GANGI, the duo devises the most concrete links yet between kraut-rock and psych of the 60's and 70's (Neu, Faust / Joseph Byrd's United States of America), Roxy Music/ENO, early Los Angeles underground art rock of the 80's (Monitor), and from Creation Record's Medicine and My Bloody Valentine to Slint, The Bomb Squad-produced hip- hop, through the information bomb, combining some of these disparate influences into new genres of the current space-time.