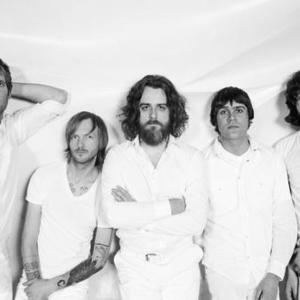 Minus the Bear are a indie rock group which formed in Seattle, Washington, United States in 2001 and have released four albums and four EPs. The band consists of Jake Snider (vocals, guitar), Dave Knudson (guitar), Cory Murchy (bass), Alex Rose (synths, vocals) and Erin Tate (drums). Original keyboardist Matt Bayles left the band in 2006, but has remained on good terms with the band and produced their 2007 album Planet of Ice.

The band is known for their amusing song titles such as "Hey, Wanna Throw Up?" and "Monkey!!! Knife!!! Fight!!!". Despite this light humor, the band's music is quite technical.

Members of the band were formerly in the bands Botch, Kill Sadie, and Sharks Keep Moving. Their sound involves a mix of Pele-esque guitar-taps and electronics, with a Don Caballero-esque sophistication of composition. The name Minus the Bear comes from the famed TV show B.J. and the Bear?minus the bear.

After initially forming in 2001 with guitarist David Knudson, bassist Cory Murchy, and drummer Erin Tate, the trio eventually recruited keyboardist/sequencer Matt Bayles and vocalist/guitarist Jake Snider. They released their debut EP This is What I Know About Being Gigantic on September 14, 2001 through Suicide Squeeze Records?who would subsequently release the majority of their albums and EPs.

The following year, on August 8, 2002, in preparation for the up-coming album the band was working on, they released the 5 track promo EP Bands Like It When You Yell "Yar!" At Them. On December 2, 2002, the band released their first full-length album, Highly Refined Pirates.

In 2004, the band released their third EP entitled They Make Beer Commercials Like This through Arena Rock Recording Co. on July 13th. The band then contributed the track "Houston, We Have an Uh-Oh" to the Vagrant Records compilation In Honor: A Compilation to Beat Cancer which was released on September 21st.

Their second full-length album, Menos El Oso, was released on August 23, 2005. The title in Spanish translates to "Minus the Bear." The album featured the band's first-ever official music videos, with videos being made for both "The Game Needed Me" and "Pachuca Sunrise". The album signaled the end to the amusing song titles featured on previous releases.

On January 2, 2006 after touring in support of Menos El Oso, keyboardist/sequencer and producer Matt Bayles announced that he was leaving the band in order to focus on record production work. His last performance with the band was on January 28, 2006. Bayles wrote on his homepage that he would be replaced by Alex Rose, an engineer on Menos El Oso.

A remix album of Menos El Oso, entitled Interpretaciones Del Oso, was released on February 20th, 2007. The title in Spanish translates to "Interpretations of the Bear." The album features remixes by Plan B, Morgan Henderson of The Blood Brothers and Jason Clark of Pretty Girls Make Graves, among others.

Minus the Bear's third full-length album, Planet of Ice, was released on August 21, 2007, with a limited vinyl pressing on Suburban Home Records. To date, there have been three official pressings of Planet of Ice on vinyl. All pressings are double LPs. The album was recorded during February and March of 2006. Music videos were made for both "Knights" and "Throwin' Shapes".

On June 3, 2008, Suicide Squeeze Records re-issued the band's third EP They Make Beer Commercials Like This. The EP was remastered and expanded to include the track "Houston, We Have an Uh-Oh".

On October 27, 2009, Minus the Bear released a digital 2 song single for "Into the Mirror", which features the title track and "Broken China". The band released their fourth original studio album OMNI on May 4, 2010.

Hold Me Down (EP)