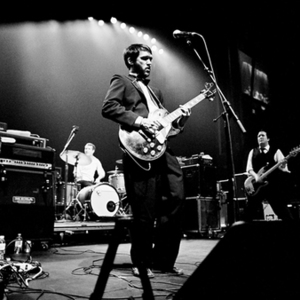 Cursive is an indie rock band from Omaha, Nebraska, United States. The band records for the label Saddle Creek Records, which is one of the Saddle Creek flagship artists. The band was formed in 1995 by Tim Kasher, Matt Maginn, Steve Pedersen (all formerly of Slowdown Virginia), and drummer Clint Schnase. In 1997, they released Such Blinding Stars for Starving Eyes. After a few years of touring the band broke up in 1998.

They posthumously released The Storms of Early Summer: Semantics of Song in the fall of that year. A year later in the summer of 1999 the band reformed. Pedersen had started law school so Ted Stevens (formerly of Lullaby for the Working Class) stepped in and joined the band. In 2000, their album, Domestica, a concept album written like a one-act play documenting the lies, hate and deceit associated with a divorce, gained them much attention from fans and critics alike and they toured with At the Drive-In.

Cursive added Gretta Cohn in 2001 on cello. The strings added complimentary sounds to that summer's Burst and Bloom. In 2002, the band toured on the Take Action! Tour.

Saddle Creek Records released The Ugly Organ in 2003, a series of internal monologues that reflects insecurities and self-doubt amidst the turmoil of life on an ever-turning emotional carousel. The music magazine, Rolling Stone, gave the album a 4-star rating, while alternative music magazine Alternative Press rated the album a perfect 5 out of 5. In 2004 The Cure selected Cursive to tour with them on their Curiosa tour. Afterwards the band went on hiatus with no specified return date.

The label put out a compilation album of unreleased songs and B-sides, The Difference Between Houses and Homes on August 9, 2005. In mid-2005 Gretta left the band to pursue other musical opportunities. Instead of replacing her, the band remained a four-piece.

After Cursive's hiatus, Saddle Creek announced that Kasher had temporarily stopped his work on his side project, The Good Life, to start recording an album with Cursive. The new album, Happy Hollow (named for an area of Omaha around Happy Hollow Boulevard, running parallel to Saddle Creek Road, and, perhaps, a comment on midwestern city life), was released August 22, 2006. Its first single was "Dorothy At Forty," released on July 11th, 2006. With this album Kasher turned his focus away from self-reflective lyrics to concentrate on what he thought were bad politics, empty suburban lives, and religious hypocrisy. Music Magazines Spin, URB, Time Out New York and Blender gave the record a 4 star rating, and Rolling Stone, gave the album a 3.5-star rating, while alternative music magazine Alternative Press rated the album a perfect 5 out of 5 saying ?Cursive haven't just redefined their sound--they've transcended it.? Happy Hollow features a five-piece horn section, a concept first introduced on the songs "Art is Hard" and "Gentleman Caller" on "The Ugly Organ"

The October following the release, the band revealed plans to bring audience participation to its catalog, offering fans a chance to remix its song "Bad Sects" through a competition on the website. The finalist is scheduled to appear as a B-side on an upcoming Cursive single. Cursive released their latest album, "Mama, I'm Swollen", on March 10th, 2009.

The Difference Between Houses And Homes