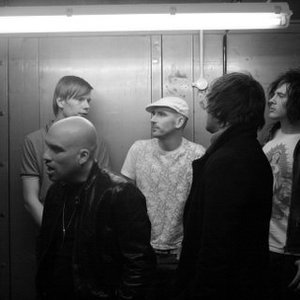 Infadels were a London-based rock band signed to the Wall Of Sound record label. The band is known for its frenetic live shows. Their debut album, We Are Not The Infadels, was produced by Jagz Kooner and released in January 2006. The follow-up, entitled Universe in Reverse, was released in June 2008. Infadels were founded in 2003 by Bnann Watts (vocals), Matt Gooderson (guitar, programming) and Alex Bruford (drums), who were joined shortly afterwards by Richie Vernon (live keys) and Wag Marshall-Page (Bass).

The band released two singles, Leave Your Body and Can't Get Enough/Murder That Sound, on their own record label, Dead At Thirty. The awards for "Best Live Act" and "Best Dance Band" at the 2004 Diesel-U-Music Awards sealed a move to the Wall of Sound record label. In January 2005 the Infadels headed into the studio with producer Jagz Kooner to record their critically acclaimed debut album, We Are Not The Infadels. The band supported the release with an almost constant touring schedule with over 150 shows in 20 countries in 2006 alone. This included two UK tours, three European tours, two Australian tours, a number of shows in the USA & China and 35 festival dates.

The band's second album, Universe In Reverse, was released in June 2008. Written largely by Bnann Watts and Matt Gooderson, and produced by Martin "Youth" Glover (The Verve, Guns N' Roses, Depeche Mode), Universe In Reverse makes the leap from dance tent to main stage, with a more urgent, rockier sound characterised by crashing guitars and revving hoover-synths. Guitarist Matt Gooderson described this evolution of the band's sound by saying: ?We took the energy and guitars of a rock ?n' roll band like The White Stripes or Yeah Yeah Yeahs, then surrounded the music in deep, cinematic sounds.?

Play Blind, the first material from the second album, was given away for free as a limited-time download in February 2008. The next single, Make Mistakes was released in April, and Free Things for Poor People was released in June 2008, reaching #1 on the UK Indie Singles Charts. On Tuesday the 17th of June, the band threw several thousand pounds from an office window in central London in celebration of their own Free Things Day[/tack]. The day was brought to an early close when the band and their fans were cautioned by the police. On Monday the 19th of August they were voted best band at the 2008 Lowlands festival by the Dutch public ahead of Editors and N*E*R*D. Drummer Alex Bruford is the son of drummer virtouso Bill Bruford, famous from bands such as King Crimson and Yes. Bassist Wag Marshall-Page is a friend of Danny Wallace, and is often mentioned in his books.

In March 2009 the band announced via their MySpace page that they had already begun recording a follow-up to Universe In Reverse. In June 2009, the band confirmed their third album would be entitled, The Future Of The Gravity Boy during their interview on 3FM's That's Live!. In May 2009 the band released their first studio material since "Universe in Reverse", by making their cover of [track artist=Infadels]Sweet Dreams available on their website. The following month a new track, Ghosts was aired on Radio 1 by Alex Metric and backed up rumours of a return to the dance inspired sound of their debut album We Are Not The Infadels.

In November 2009 a new track, "Ghosts" was aired on Radio 1 by Alex Metric and backed up rumours of a return to the dance inspired sound of their debut album We Are Not The Infadels. Following this, Alex Metric offered to produce their next record and in January 2010, the band confirmed that Metric would indeed be on production duties for new LP The Future Of The Gravity Boy.

On the 1st of September 2012 the band announced via their Facebook that they had disbanded.

The Future Of The Gravity Boy

Girl That Speaks No Words (MCD)

We Are Not The Infadels