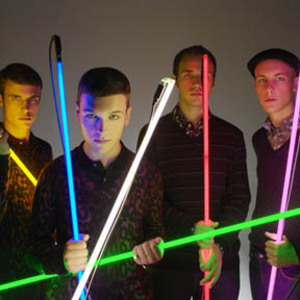 The Ordinary Boys are an English indie rock band formed in 2002 in Worthing, a seaside town in West Sussex, originally named Next in Line. They were influenced by mod revival and britpop music, as well as the bands Madness, The Specials, The Kinks and The Smiths. Their name derives from a Morrissey song, "The Ordinary Boys". The band consisted of members Samuel Preston (vocals, guitar), William J. Brown (guitar), James Gregory (bass), and Simon Goldring (drums), who replaced Charles ?Chuck? Stanley in 2005.

Despite their limited success on the UK charts, their popularity grew, particularly due to media coverage that the lead singer, Samuel Preston, received when participating in Celebrity Big Brother UK in January 2006. Following that appearance, sales of the band's albums increased and the "Boys Will Be Boys" single moved from #33 to #3 in four weeks. Fans of the band were nicknamed "The Ordinary Army".

Notable songs include "Maybe Someday", "Talk Talk Talk", and "Seaside" from their debut album; "Boys Will Be Boys" from their second album; and "Over the Counter Culture", which was featured in the soundtrack for Burnout 3: Takedown. Their single "Lonely At The Top" marked a change of sound, with more of a pop feel to it; featuring synthesisers and samples.

Yahoo! UK revealed that The Ordinary Boys was the fourth most searched for keyword of 2006 in their annual top ten search results.

The song "Boys Will Be Boys" featured in the fifth Harry Potter movie, Harry Potter and the Order of the Phoenix. The band was also referenced in episode five ("Smoke and Mirrors") of series two of The IT Crowd.

In early 2008, lead singer Preston confirmed the band's split through the official Ordinary Boys website, and announced he was writing new material for a solo album. Though it was apparently completed in 2009, the album was never released.

The Ordinary Boys will be reuniting in December 2011 for a UK tour. There is no involvement from William Brown or James Gregory and the band have recruited a new guitarist, bassist and keyboard player, along with original member Sam Preston and drummer at the time of split, Simon Goldring. They have also made a new song called "Run This Town."

How To Get Everything You Ever Wanted In Ten Easy Steps

Boys Will Be Boys (CDS)

Over The Counter Culture