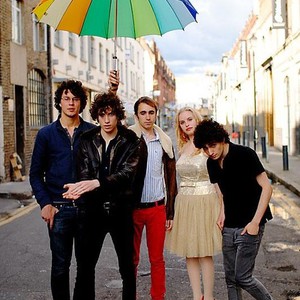 Cajun Dance Party were an indie rock band which formed in London, England in 2005. They consist of Daniel Blumberg (vocals), Robbie Stern (guitar, violin), Vicki Freund (keyboards, vocals), Max Bloom (bass, vocals), Will Vignoles (drums). The band came into being when guitarist Robbie Stern invited Daniel Blumberg, Max Bloom, William Vignoles and Vicky Freund to start playing together, originally to participate in their school 'battle of the bands' in 2005.

The band came into being when guitarist Robbie Stern invited Daniel Blumberg, Max Bloom, William Vignoles and Vicky Freund to start playing together, originally to participate in their school 'battle of the bands' in 2005. In their first few band practices, the 15 year olds began working on their first four songs, 'The Next Untouchable', 'Colourful Life', 'Amylase' and 'Buttercups', which were recorded as demos and submitted to their myspace site shortly after.

The band played their first few shows at the West London all ages club night 'Way Out West', performing in the bar beneath Brentford FC football stadium. Way Out West was well known for putting on many up and coming bands such as Jamie T, Late of the Pier, Video Nasties, and Laura Marling. The organizer of the event, Keith Anderson, began to manage the band shortly after. Their first single, 'The Next Untouchable', was released on Anderson's record label as a limited edition 7" single, with 500 copies being put into production.

Cajun Dance Party's debut album was entitled The Colourful Life, and was released in April 2008. The band recorded the album sessions with Bernard Butler at the recording studio, West Heath Yard, owned by Edwyn Collins. 'West Heath Yard' was also a music industry spoof which aired for a short while on channel 4 in 1999, The album consisted of 9 tracks, with singles from the album including 'Colourful Life', 'The Race', and 'Amylase'. The album was given 4/5 in the Guardian. [2]

The band have made many festival appearances in the UK and abroad, performing at such festivals as Reading and Leeds, Glastonbury, Oxegen, T in the Park, Underage Festival, Camden Crawl, Summersonic Festival in Japan and Les Inrocks tour in France. The first new song to be heard after 'The Colourful Life' is called '5 days', and a demo of the song was recently given away free on the band's mailing list.

Danny and Max are now playing in Yuck. It is believed that they did split sometime in 2010 but it is unknown if Vicky, Roger and Robbie have continued without the rest of the band