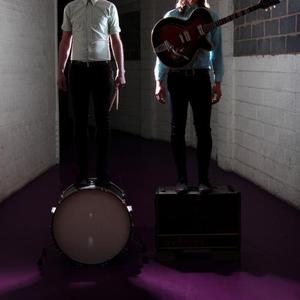 Bromheads Jacket (formed in 2005) were a three-piece garage rock group from Sheffield, UK consisting of Tim Hampton on vocals and guitar, Dan Potter on drums, and Jono West on bass. They released seven singles and two albums on the independent Marquis Cha Cha label as well as a split 7" with The Streets doing their punked out version of "When You Wasn't Famous". Their second album, On The Brain took a much more retro feel after an obsession with The Stooges amongst others. Jono left the band in late 2008 after London Calling at Amsterdam's Paradiso venue.

Their debut album "Dits From the Commuter Belt" was released on Marquis Cha Cha on 6th November and available on a Limited Edition 12" Vinyl (500 copies) and the more traditional CD format.

Their track 'What Ifs + Maybes' was included in an episode of The OC - Season 3 Ep 18 - during a party at Jess' house, as well as their track "Fight Music For The Fight" being featured on the soundtrack of Burnout Dominator.

Bromheads Jacket released their second album On The Brain in September 2008, the first single release off the album was the monstrous organ behemoth of "Speakerbox" (runtime 1m 30secs) followed by the ultra catchy "Turn Me On" in October 2008. Jono left after the On The Brain tour to work for a medicine charity, it was later announced in mid 2009 as Tim and Dan announced their new 2 piece project Bromheads.

What If's And Maybes