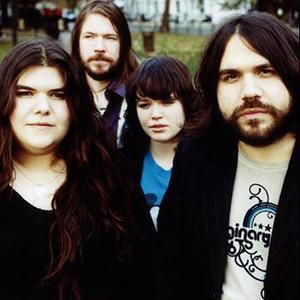 The Magic Numbers are a four piece indie band from Ealing, London. The band consists of two brother-and-sister pairs, Romeo Stodart (guitar, lead vocals) and his sister Michele Stodart (bass, vocals), and Sean Gannon (drums) and his sister Angela Gannon (percussion, melodica, vocals), who came together as a band after Romeo and Sean started writing songs together. While the Gannons are of Irish heritage, the Stodarts are the children of a Scottish father and a Portuguese mother and were born in Trinidad in the Caribbean and raised in New York, before moving to London in the mid-1990s.

The band are currently signed to Heavenly Records, and their self-titled debut album was released on 13 June 2005. Singles from that album have included Forever Lost, Love Me Like You, Love's A Game and I See You, You See Me. Later on that year they recorded a new song, Gone are the Days, used on the War Child charity album Help! A Day in the Life

In 2005 they supported Athlete, Doves, and Brian Wilson, and played the Glastonbury Festival to a fantastic reception. August saw the band play at the dual-venue V Festival in Chelmsford and Staffordshire and Leicester's Summer Sundae.

The band have since released their second album, Those The Brokes in November 2006, and the Undecided EP in September 2007.

This Is A Song (CDS)

Hymn For Her (EP)