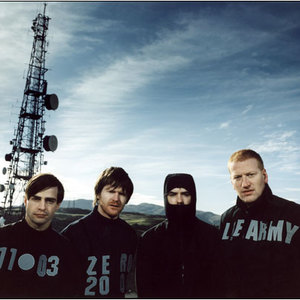 The Beta Band (1996-2004) were an alternative rock group from Edinburgh, Scotland who received much critical acclaim and achieved cult status, but failed to make much of a commercial impact on the popular music scene. Their style was self-described as being folk hop, a blend of folk, rock, trip hop, and experimental jamming. Their music has featured on numerous film and TV soundtracks. The song "Dry the Rain" from their 1997 debut EP, Champion Versions...

Their music has featured on numerous film and TV soundtracks. The song "Dry the Rain" from their 1997 debut EP, Champion Versions, later to be released on the 3 EP's album, was possibly their most popular track and was famously featured in the John Cusack film, High Fidelity. The song "Smiling" from the self titled album "The Beta Band" is the background music to the UK's Soccer AM, Cross-Bar challenge. "Needles in My Eyes" was featured on a fourth season episode of House MD.

Their live performances were legendary, often ending with the whole band playing percussion. Their dancing and energy got the whole audience moving, often in the same style as their idols on stage. Their "Best of" CD contains a CD of them playing live at the Shepherds Bush Empire in one of their final gigs and manages to capture some of this energy. It has been suggested, sometimes by the band themselves, that they were better live than recorded.

Steve has now released an album under his own name after his post-Beta Band projects Black Affair and King Biscuit Time, John, Robin and Gordon Anderson aka Lone Pigeon have formed The Aliens (www.myspace.com/thealiens1) and Rich is The General & Duchess Collins.

The Best of the Beta Band Disc 1

The Best of the Beta Band Disc 2