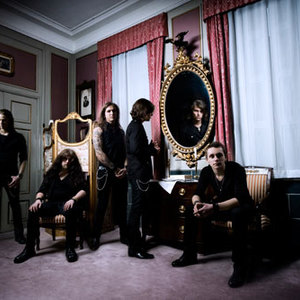 1/ Aspera is a new progressive metal band from Norway recently signed by InsideOut Music. These five aspiring musicians from Skien, Norway, are truly what can be described as ?youngsters' and ?newcomers', being just 20 years of age (all born in the last quarter of the year 1989!) and even only 18-19 years old whilst producing ?Ripples?. The name ASPERA is taken from Latin and stands for ?thorns' or ?rugged ground', which describes the band's complex and colourful sound in an appropriate way. Due to a legal dispute, Aspera changed its name and is now known as Above Symmetry.


2/ Aspera (initially Aspera Ad Astra) is an American indie rock band from Philadelphia, Pennsylvania. Aspera formed in 1996 under the name Aspera ad Astra in Philadelphia, and released a 7" split with Haelah before issuing their debut full-length in 1998. Following this the group underwent lineup changes before the release of their 1999 EP; several drummers would join and leave the group until late 2000, when A.J. Edmiston joined. Around this time the group shortened its name. They began releasing material on Jagjaguwar Records in 2002, including a re-release of their 2001 album Sugar & Feathered. 2007 saw their most recent full-length issued on Philadelphia label Burnt Toast Vinyl.