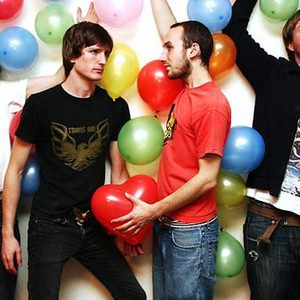 Sandwiched between Brighton & Hastings, the seaside town of Eastbourne is the unlikely outpost and home to future alt-rock heroes, The Late Greats. In equal parts intelligent, intense, chaotic and fragile, the four piece have quietly bided their time over the last 12 months, writing their debut album (in between epic bouts of table tennis) thus honing the sound of The Late Greats. Life Without Balloons is a record indebted to the band's love of lo-fi US indie/alt-rock (Sonic Youth, Pixies, Pavement) but stamped with a truly provincial, English delivery glittering with melodic gold.

Life Without Balloons is a record indebted to the band's love of lo-fi US indie/alt-rock (Sonic Youth, Pixies, Pavement) but stamped with a truly provincial, English delivery glittering with melodic gold.

Kicking off with ltd edition single Futures Gold (which sold out in two days), the album opens with the immortal line and statement of intent, ?HEY! I'm pleased to meet you / and all your stupid faces?. What follows, is nine songs of near pop-perfection: showcasing The Late Greats' unflinching mix of instant, poppy melodies with uncompromising spikiness and obtuse, heavy heart lyrics.

The band's duel lead vocalists Max Arnold and Ryan Griffiths have the uncanny knack of making the most melancholic of melodies sound uplifting and life affirming. To this affect, The City Swallowed You Whole intersperses a chest rattling moog bass line with sweetly resigned vocals, whilst Surrender's bittersweet, relationship-in-meltdown lyrics -?I'm about to surrender / take that ribbon off my finger? ? belie the overwhelmingly positive sing-a-long chorus.

The soaring guitars and heavenly ?ooh-ooh? backing vocals of Quick Fix are perhaps the album's centre piece. The whole climatic chorus is so maudlin and urgent you can almost feel the sea rain lashing down on Eastbourne at closing time on a cold, drunk Friday night.

Touring and gigging over the last year with the likes of Late of the Pier, Blood Red Shoes and Hot Club de Paris has developed the Late Greats into an incredibly tight and thrilling live band.