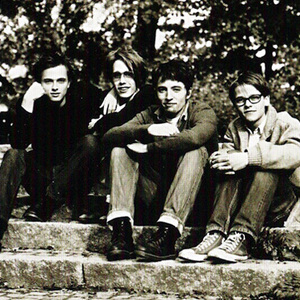 Mew is an alternative rock band which formed in Hellerup, Denmark in 1995. The band consists of Jonas Bjerre (vocals), Bo Madsen (guitar), and Silas Utke Graae J?rgensen (drums). When on tour, Mew is supported by Dr. Nick Watts (Headswim) on keyboard, and Bastian Juel on bass (original bassist Johan Wohlert left in 2006). The band's music can be described as experimental pop or as singer Jonas Bjerre mentioned in a recent interview: "I think that we combine pop music with something that's much more experimental, in our own way. I don't think I would even try and describe it. It's difficult."

The members of Mew started playing music together in 1995. Mew first achieved success in Denmark with their album Frengers, although their debut album, A Triumph for Man, had been met with much critical acclaim back in 1997. At the 2003 Danish Music Critics Award Show, Mew won the awards for "Album of the Year" and "Band of the Year." Until this point Mew was relatively unknown outside of Denmark; however after a European tour supporting R.E.M. Mew began to attract wider attention. After releasing the critically-acclaimed album And The Glass Handed Kites, featuring contributions from J Mascis from Dinosaur Jr, Mew has built on their success in Denmark as well as attracting attention from the UK. In the summer of 2006, they toured as the supporting act for Bloc Party in the U.S. as well as for Kasabian in the U.S. and Canada in the fall. After these tours, they returned to Denmark to work on new material.

On March 14th, 2007, Mew embarked on their first ever headlining tour in America with Oh No! Oh My! as the supporting act. Their fifth studio album, No More Stories/Are Told Today/I'm Sorry/They Washed Away//No More Stories/The World Is Grey/I'm Tired/Let's Wash Away, was released in August 25, 2009. They've also toured with Nine Inch Nails, Kings of Leon and Sigur R&oacute;s.

No More Stories Are Told Today...

And The Glass Handed Kites