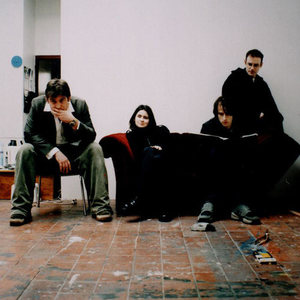 The Delgados were a scottish indie rock band who formed in Hamilton, South Lanarkshire in 1994 after friends Alun Woodward (vocals/guitar), Stewart Henderson (bass) and Paul Savage (drums) were forcibly ejected from the band Bubblegum. Joined by Paul's then-girlfriend Emma Pollock (vocals/guitar), the band chose to name themselves after Tour de France winning cyclist Pedro Delgado. They split in April 2005, with Emma signing a solo deal with 4AD shortly afterwards. June 2006 saw the release of a mammoth 29 track album of all the band's Peel sessions.

The band continue to turn out promising independent artists under their cult record label Chemikal Underground.

Their first commercial release came with the inclusion of their track "Liquidation Girl" on the compilation album Skookum Chief Powered Teenage Zit Rock Angst from Nardwuar the Human Serviette. Neglecting to go the traditional route of signing to a record label, the band instead started their own, Chemikal Underground, with which to release not only their records but also those of other local bands. Chemikal Underground's first release was naturally The Delgados first single Monica Webster / Brand New Car. Despite being greatly overshadowed by the Blur/Oasis race, the single caught the attention of veteran BBC Radio 1 DJ John Peel and the band quickly became one of his favourites, going on to play more than ten sessions for his show.

The cost of Chemikal Underground's second release, the single Disco Nation 45 by Bis, left the cash-strapped label unable to afford another release by The Delgados, so their next release Lazarwalker came from the London based Radar Records. Tempted by Radar to a five album deal, the band declined, instead poaching their A&R contact, Graeme Beattie, for work at Chemikal Underground.

Another single, Cinecentre followed in early 1996 as the band juggled work at the label (made all the more hectic with Bis' appearance on Top of the Pops) with several tours, and recording their debut album. The band released two more singles, this time taken from their album Domestiques released on October 28, 1996. Both singles and the album were critically lauded, with the song "Under Canvas, Under Wraps" being voted number three in John Peel's Festive Fifty.

The band released their second album in 1998. Peloton - also a cycling reference - which saw the band begin to broaden their musical palette. Including a wider range of styles and more complex arrangements the record proved a critical success. It did not sell in huge numbers, however, though the single Pull the Wires From the Wall gave the Delgados their first UK chart hit, reaching number 69. The band's close relationship with John Peel continued, with Pull the Wires From the Wall voted to number one in the Festive Fifty (it would also make the all time chart made in 2000) and other entries at 9 and 38.

The Delgados' evolution continued with The Great Eastern in 2000. The record, produced by Dave Fridmann, was heavily orchestrated and contained shifting time signatures. Again, the record was lauded by the critics but failed to significantly expand the band's following. The first single, American Trilogy, reached number 61 in the UK charts. The record was nominated for the Mercury Music Prize and four of its songs reached the Festive Fifty, two in the top ten.

This pattern was extended for their fourth album, Hate, which was released on Mantra rather than the band's own Chemikal Underground label. The album's epic songs were popular among critics and festive fifty voters but a wider public still proved elusive. The song The Light Before We Land was used as the opening music for the anime Gunslinger Girl, bringing the band to a new audience.

The band returned to their own label for 2004's 'Universal Audio' - which marked something of a move away from the orchestrated sounds of its two predecessors, towards a simpler, poppier approach.

The band announced they were disbanding in April 2005 due to the departure of bass player Stewart Henderson who found it difficult "to pour so much of my energy and time into something that never quite seemed to get the attention or respect I felt it deserved". The four friends will continue to run Chemikal Underground together. Songwriters Emma Pollock and Alun Woodward are pursuing individual projects, while drummer Paul Savage will continue production duties at the band's Chem19 Studios in Hamilton and in a new studio.

The members recently announced that they've secured the rights for their BBC session performances. A double-disc containing 29 tracks was released on June 12th 2006 in Europe. A release in the USA is expected before the end of 2006.