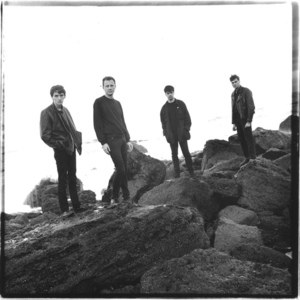 The Wedding Present are an indie rock group formed in Leeds, England in 1984. They evolved from the ashes of The Lost Pandas. Their music has evolved from fast-paced indie rock in the vein of their most obvious influences The Fall, Buzzcocks and Gang of Four, to more varied forms. Throughout their career, they have been led by vocalist and guitarist David Gedge, the band's only constant member. The Lost Pandas fell apart in 1984 when guitarist Michael Duane (later of DUSTdevils) was unfortunately sacked, and Panda's drummer Jaz Rigby followed in protest.

The Lost Pandas fell apart in 1984 when guitarist Michael Duane (later of DUSTdevils) was unfortunately sacked, and Panda's drummer Jaz Rigby followed in protest. Gedge and the Pandas' bass player, Keith Gregory, decided to continue the band, renaming it The Wedding Present.

Gedge wanted to use the name "The Wedding Present" in honour of one of his favourite bands,The Birthday Party.

Gedge and Gregory recruited an old schoolmate of Gedge's, Peter Solowka, to play guitar and auditioned a string of drummers, including Mike Bedford, with whom they recorded a demo tape, before settling on Shaun Charman. The country's clubs and bars were toured as the band prepared for the recording of their first, self-financed single.

After some consideration, "Go Out And Get 'Em, Boy!" was chosen over early favourite "Will You Be Up There?". The A-side features drumming by hired hand Julian Sowa with Charman on its B-side. The single was released on the band's own Reception Records label with distribution through Red Rhino. Although Reception was only intended to be a vehicle for the release of their own material, it also released a number of singles by This Poison! and Cud.

Two more singles followed that did well on the independent charts and the band was spotted by veteran BBC radio DJ John Peel, who immediately started championing them and invited them to do a radio session, starting a long collaboration.

By the time the band started work on their debut album, a number of independent and major record companies showed interest, but the band declined all offers and decided to keep releasing their material themselves. The album was released in 1987 and titled George Best after the well-known Northern Irish football player. Disagreement on production values with the record's producer, Chris Allison, led to the product being remixed by the band and their engineer, Steve Lyon. The larger part of these conflicts seemed to lie with the personal and musical incompatibility of Allison and Charman.

Upon its release, the album was critically acclaimed and the band were soon lumped in with some of their peers as the 'shambling' or C86 scene, a categorization that they vehemently declined (although they were featured on the original C86 compilation). Musically, the album featured fast-paced rhythm guitar attacks; lyrically, apart from a few tentative excursions into social critique ("All This and More") and politics ("All About Eve"), Gedge's main concerns (which would become his trademark) were love, lust, heartbreak and revenge. Soon after the release of George Best, the early singles and radio sessions were compiled and released as Tommy (1985-1987).

With the departure of Charman very early on in 1988, Simon Smith took up the drum stool and follow up album, 1989's Bizarro was again popular with the music weeklies.

When Solowka, who has Ukrainian roots, started fooling around with a Ukrainian folk tune during one of their many Peel sessions, the idea arose to devote some of their radio time to recording their versions of Ukrainian and Russian folk song, encouraged by Peel. To this end, two guest musicians were invited, singer/violin player Len Liggins and mandolin player Roman Remeynes, and three Peel sessions were recorded with Gedge temporarily limiting himself to playing rhythm guitar and arranging the songs.

The band planned on releasing eight cuts from the Ukrainian sessions on a 10" LP and an initial batch was pressed when Red Rhino went into receivership. Rather than trying to find a new distribution company, the band decided to fold their Reception label altogether and sign with a regular record company: RCA. Solowka, Liggins, and Remeynes later split from the band to concentrate on the Ukrainian material as the band The Ukrainians.

Seamonsters is the third studio album by English rock band The Wedding Present. It was recorded in ten days in 1991 by American producer Steve Albini at Pachyderm Studio in Cannon Falls, Minnesota. Albini had previously recorded two EPs with the group, Brassneck and 3 Songs and, like those records, Seamonsters has a rougher, harsher overall sound than the group's earlier two albums.

Solowka was replaced by Paul Dorrington and the band in 1992 released a single every month, and each of these songs charted before being released as compilations of both the A and B-sides. Each of these 12 singles hit the UK Top 40 and the band tied Elvis Presley's record of most Top 40 singles in the span of a year.

Following a quiet 1993 in which Gregory left and was replaced by Darren Belk, they followed up their record-breaking 1992 year with a new LP in 1994 called "Watusi". Following this, Dorrington left, Belk moved to guitar and they temporarily became a 3-piece before Jayne Lockey arrived. A mini LP, helpfully called "Mini" drove up early '96 shortly before "Saturnalia" zoomed in Summer '96 (along with the addition of new guitarist Simon Cleave after Belk's depature).

The first Wedding Present single in 7 years was released in November 2004 followed by an album in February 2005. This line-up was Gedge, Cleave, bassist Terry de Castro and drummer Kari Paavola. Paavola declined to tour and subsequently left replaced by Simon Pearson and then Graeme Ramsey. Simon Cleave left early 2006 but rejoined in 2009. His 3 year void was filled by guitarist Christopher McConville.

In more musical chairs, guitarist Cleave departed again later in 2009 due to ill health. The vacant guitar position was actually snabbed by the drummer, Ramsay, who was replaced on the drum stool by Charlie Layton (who had previously served for a very short time in 2006). Following this in Summer 2010, long-serving bassist, Terry de Castro, also vacated to be replaced by Pepe le Moko. A year later, in late 2011, after the recording of the band's 8th studio album, Valentina, Ramsay departed to be replaced by (ex-The Young Playthings and The Pipettes), Patrick Alexander.

Locked Down And Stripped Back