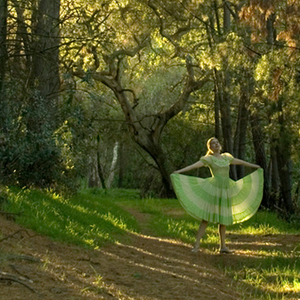 Lavender Diamond is a Los Angeles-based folk/country-pop quartet known for its light-hearted, often winsome sound, its simple, romantic lyrics, and the charismatic, whimsical stage presence and ethereal vocals of frontwoman Becky Stark. Formed in 2003, the band signed to Rough Trade Records in Europe and Matador Records in the US in 2006. They released their full-length album "Imagine Our Love" in 2007.

The folk delight that is Lavender Diamond originally came to life in Bird Songs of the Bauharoque, a punk operetta inspired by the work of American painter/architect Paul Laffoley. Vocalist Becky Stark wrote and created the piece with a friend while living in Providence, RI, and starred as Lavender herself, a winsome part bird/part human who wants peace on earth. The indie stage show was such a hit at home that Stark and company went on to tour 56 cities across North America in 2003. Her debut solo effort, the self-produced Artefacts of the Winged album, was made available during this tour, and as Stark continued writing songs, she felt they deserved to be taken more seriously. A move to Los Angeles in 2004 provided Stark with the creative arena she had been searching for; befriending guitarist Jeff Rosenberg (Pink & Brown, Tarentel, the Young People) and forming a country-pop act with him, things started to take shape for Stark. When she wasn't keeping busy with Rosenberg, she was playing classical arias and Tin Pan Alley originals with classical pianist Steve Gregoropoulos (W.A.C.O.), and making psychedelic doo wop material with drummer Ron Rege, Jr., formerly of the Swirlies.

At the end of the day, Stark opted to collect such sounds as one, and gathered her contemporaries for Lavender Diamond in 2004. Matching the airy lightness of Linda Ronstadt and Carole King with Bacharach-like arrangements, Lavender Diamond issued The Cavalry of Light EP in 2005; a second release, a split 7" with Queens of Sheeba for Cold Sweat, also appeared that year. A buzz around the blogosphere and indie mag elite began to take shape by early 2006, and performances at ArthurFest, South by Southwest, and the CMJ New Music Seminar only added fuel to the record label frenzy. In November 2006, while touring with the Decemberists, Lavender Diamond signed to Rough Trade in Europe and Matador in the U.S. The Cavalry of Light was slated for reissue in late January 2007.

Growing up in a rickety house in rural Maryland between an abandoned cement factory and a power plant, Lavender Diamond's Becky Stark first experienced music at church. Indeed, her mother was devout enough to have even studied to be a minister but, according to Becky ?she got kicked out of ministerial school for being too wild and being into rock and roll and wearing miniskirts?.

For the Starks, music was its own religion. ?My mum had a lot of old ?45s and on Sunday mornings instead of going to church we would all sit round and she'd make us learn all the lyrics to the songs. Our Sunday morning ritual was all about music.?

But, despite singing as part of a state department-sponsored children's choir ? who once supported Motley Crue on the bill at the 1989 Moscow Music Peace Festival - it wasn't until she discovered the nearby Washington DC punk community as a teenager that Becky realised that she could make music for herself.

?I was friends with Gabe Andruzzi, who's now in The Rapture? she remembers ?and he was really into punk rock. He took me to see Fugazi and it was really mindblowing - discovering that this music existed and feeling the energy of it and the political meaning and realising how music could serve a community.?

The only problem was that Becky was living a kind of double life. In the evenings she'd go and see local DIY punk bands play in community centres and church halls. But in the daytime she performed in musical theatre and appeared on TV in order to help her mother pay the rent. ?I was on this really geeky kid's TV show and I was really getting into theatre which wasn't considered cool.?

Feeling inspired by the DC punk scene but also distanced from it because of her other interests, Becky moved to Rhode Island to study semiotics and Russian literature at Brown University. There she started hanging out at Fort Thunder, a communal space that hosted shows from the city's burgeoning noise scene, including the legendary Lightning Bolt.

?There was just such a utopian anarchic feeling at Fort Thunder? says Becky. ?There was no sense that anybody could not make their own sound. No such thing as good or bad ? everybody was just making crazy noises. And that's when I started writing music. I used to write these crazy musicals, do collaborations with artists, do these wild art projects. It was total energy.?

After a brief period of study at New York's Merce Cunningham Dance conservatory, Becky returned to Rhode Island to set up her own theatre company, the Bird Family Baby Bird.

?I started making plays and writing operettas? she laughs. ?We had plays and crazy costumes and I would sing opera and we would have marionettes and elaborate painted sets. That's when I invented the character of Lavender Diamond.?

According to Becky, Lavender Diamond was a bird who was an emissary from the bird world - half bird, half human. The character would explain to the audience that she was there to help them understand the natural world, bringing joy and peace at the same time.

Galvanised by Fort Thunder's spirit of self-enablement and inspired by her mum's Linda Ronstadt records, Becky enrolled on a songwriting course, moved to LA and produced a solo album called ?Artifacts Of The Winged'. It was in LA that she hooked up with Jeff Rosenberg, a friend from Rhode Island. Enlisting Ron Rege, noted illustrator and author of the classic graphic novel ?Skibber Bee-Bye' and classical composer Steve Gregoropoulos, Becky decided to use Lavender Diamond as the name of a new band. By now you'll already have a copy of their first release, ?The Cavalry Of Light' EP, which is also one of the year's best ? four pristine pocket symphonies that combine the best of
the early ?70s Brit-folk boom with gorgeous arrangements and a sense of heartbroken wonder.

If that's not enough, the band are currently finishing their debut full-length at Stag Street studio in Los Angeles, although, typically it doesn't sound like they're sticking to accepted modes of record-making. ?When we're in the studio I do magic spells? laughs Becky. ?They're spells to bring our love of our music into the world and in turn bring happiness and joy into the world. We like to imagine the sound of the music covering the world with love. Lavender Diamond is about believing in the practical power of love.?

Now Is The Time

The Cavalry Of Light (EP)