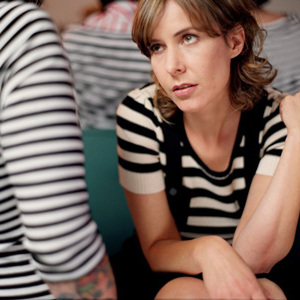 Eleni Mandell, a singer/songwriter from Los Angeles, California, often cites Tom Waits and X as her biggest influences. Mandell self-released her Jon Brion-produced debut album Wishbone in 1998. Thrill followed in 2000 on Zedtone Records - the label that has released all of her subsequent full-length albums: Snakebite, the all-country album Country for True Lovers, Afternoon, Miracle of Five, and Artificial Fire. I Can See The Future is her first release on Yep Roc.

Mandell also has several releases on the Minneapolis based Heart of a Champion record label: vinyl pressings of Snakebite and Country for True Lovers, two 7" singles, and a limited edition jazz vocal CD EP titled Maybe, Yes. Mandell's songs have appeared in several movies and television shows (including Six Feet Under), and she received much acclaim for her cover of the song "I Love Paris", which was used in a fast food commercial starring Paris Hilton. Mandell also sings, plays guitar, and writes for the L.A. pop supergroup The Grabs. She is also one-third of The Living Sisters.

I Can See the Future