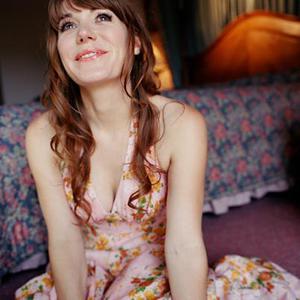 Jenny Lewis (born January 8, 1976, in Las Vegas, Nevada) is an indie folk singer/songwriter/guitarist, who is best known for being the lead singer and guitarist for the indie rock band Rilo Kiley. She has released two solo albums, 2006's "Rabbit Fur Coat" (with The Watson Twins) and 2008's "Acid Tongue". She is also a former child actress. Music In 1995, she formed the indie rock band Rilo Kiley along with her friends Pierre De Reeder, Blake Sennett and Dave Rock (later replaced by Jason Boesel).

In 1995, she formed the indie rock band Rilo Kiley along with her friends Pierre De Reeder, Blake Sennett and Dave Rock (later replaced by Jason Boesel). Beginning with a country sound, Rilo Kiley gravitated toward a downbeat indie rock sound, and with their 2004 album More Adventurous found widespread success. Critics such as Pitchforkmedia attributed this to the "wise" decision to front Lewis on most of the songs (on earlier albums, Sennett contributed about half the vocals). The song "Portions for Foxes" was a hit, and in 2005 the band was picked up by Warner Bros., putting them on a major label for the first time. They opened for Coldplay on their U.S. tour in 2005.

In 2002, Lewis was asked to contribute some female vocals for The Postal Service, whose album Give Up was an international success. Lewis performed in the video for the hit "We Will Become Silhouettes", and toured with the band in 2003. Lewis also contributed vocals to several tracks on the 2004 Cursive album The Ugly Organ.

In 2004, Conor Oberst invited Lewis to record a solo record for record label Team Love. Described by Lewis as "a kind of soul record," Rabbit Fur Coat, released in January 2006, features contributions from musicians Conor Oberst of Bright Eyes, M. Ward, Maroon 5 guitarist James Valentine, and Ben Gibbard of Death Cab for Cutie on a cover of The Traveling Wilburys song "Handle With Care". The Watson Twins provide accompaniment and the album is billed as Jenny Lewis with The Watson Twins. Lewis toured with the Watson Twins in support of the album in early 2006.

She has also provided vocals on tracks for The Elected and Johnathan Rice.

Infamous for her quirky clothing and ever constant red hairstyle, Lewis has become a fashion icon in the indie music world.

Lewis was given an "Esky" for Best Temperature Raiser in Esquire's 2006 Esky Music Awards in the April issue.

In the April 2006 issue of Spin Magazine, Lewis lists the "Music That Changed My Life" in a full page article, noting predominately late 1980s and early 1990s hip-hop as an important influences on her musical development. Albums such as N.W.A.'s Straight Outta Compton, De La Soul's 3 Feet High and Rising and Beastie Boys' Paul's Boutique are listed in the article, as well music by Too Short, Jungle Brothers, Black Sheep, Souls of Mischief and Freestyle Fellowship. In the same article, she is quoted as saying "I'm an Easy-E girl" showing her adoration for the deceased hip-hop producer and former member of the group N.W.A.. She remembers an encounter with Freestyle Fellowship member Aceyalone, "I actually saw them in the early '90s at a Hollywood Club. I went by myself, and Aceyalone picked me out and freestyled about me. Maybe it was part of his shtick - to dis the enthusiastic but lonely white girl. I must've looked like such a poser."

She made her debut in a Jell-O commercial, then starred as a child in a number of films during the 1980s. Jenny was featured in the 1996 made-for-TV movie Talk To Me with Yasmine Bleeth. Three of her more notable screen credits were Troop Beverly Hills, The Wizard, and Pleasantville. She also had small roles on such TV shows as Baywatch, Golden Girls, Growing Pains, Roseanne, Mr. Belvedere, and Brooklyn Bridge. She continued acting until 2001.