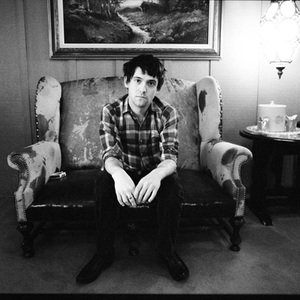 Conor Oberst is an American singer-songwriter born February 15, 1980 in Omaha, Nebraska. He began his recording career in 1993 at the age of 13 and has since produced an enormous amount of material. Conor was deeply influenced early on by singer-songwriters David Dondero and Simon Joyner. His first two albums "Water" and "Here's to Special Treatment" were both released in 1994. Rolling Stone has referred to him as "rock's boy genius.

His current project is Bright Eyes, and he also served as the frontman to Desaparecidos (a punk-oriented side project). In August 2008 Conor released his first solo effort, titled Conor Oberst, in over a decade.

At fourteen years of age, Oberst became singer and guitarist of Commander Venus, an indie rock band. The former members of Commander Venus, Tim Kasher of Cursive, Robb Nansel (who now runs Saddle Creek), and Todd Fink of The Faint, would later go on to feature in many Saddle Creek recording groups. Conor was also a member of the band Park Ave, which he joined after terminating the difficult relationship he had with Megan Saienni, due to an affair with Maria Pantin.

Oberst was also guitarist and singer for the band Desaparecidos. The music and lyrics of Desaparecidos differ greatly from Bright Eyes, having more in common with punk rock than folk. The lyrics are generally social and political commentary on the state of affairs in America, the pitfalls of the suburban lifestyle, and America's love of capitalism as opposed to the more introspective lyrics of Bright Eyes.

Oberst is one of the founding members of the independent record label Saddle Creek Records, which hosts and has hosted bands including Cursive, Desaparecidos, The Faint, Rilo Kiley (who left to start their own label Brute/Beaute Records), Bright Eyes, Son Ambulance, Azure Ray, The Good Life, and Sorry About Dresden, among others.

Oberst is currently involved in a boycott of Clear Channel Communications. His broadcast television performances include a spot on The Tonight Show with Jay Leno in March 2005, which sparked controversy with his performance of the incendiary "When the President Talks to God", The Late Show with David Letterman, on which he performed "The Trees Get Wheeled Away", and his guitar-smashing performance of "Road to Joy" on The Late Late Show with Craig Ferguson.

Oberst was a member of the Vote for Change tour in 2004 with Bruce Springsteen and REM. He has recently started his own label, Team Love, which is currently hosting bands such as Tilly and the Wall, M. Ward, Jenny Lewis and The Watson Twins, A Weather, Capgun Coup, and David Dondero.

Soundtrack To My Movie (Tape)