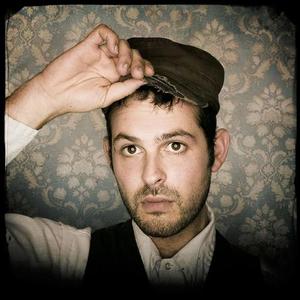 Gregory Alan Isakov has been described by Boulder Weekly, "Strong, subtle, a lyrical genius" and has been compared to his influences; Bruce Springsteen, Kelly Joe Phelps, Iron & Wine and Gillian Welch. Gregory's humble presence and his overwhelming voice and guitar style has been treasured by an ever-growing and captivated fan base. Born In Johannesburg, South Africa, Gregory Alan Isakov immigrated to the States with his family and grew up in the Philadelphia area.

Born In Johannesburg, South Africa, Gregory Alan Isakov immigrated to the States with his family and grew up in the Philadelphia area. He started touring at the age of 16 with his first band. In 1999 he sought out his solo acoustic roots and moved to Colorado where he now resides.

He has been taking on the folk music scene with his 2003 release "Rust Colored Stones" LP. and his 2005 release "Songs For October". Gregory Alan Isakov's song-craft lends to the deepest lyrical masterpieces, and his live performance has been known to quiet and shake the biggest rooms.

This year, Gregory has shared the stage with numerous touring artists such as Rodrigo y Gabriela, Alexi Murdoch, and Fiona Apple. Gregory has performed throughout the United States; and has played numerous music festivals such as Falcon Ridge Folk Fest, Rocky Mountain Folks Fest and Southpark Music Festival. Gregory has toured solo and with his band "The Freight", and is currently recording a new album in Colorado, scheduled for release in early 2007. "Rust Colored Stones" and "Songs for October" are available at www.cdbaby.com.

In 2007, Gregory was named "Best Male Singer-Songwriter" by Westword Magazine.

That Sea, The Gambler