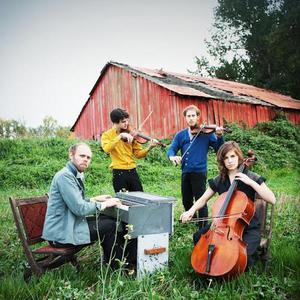 After fronting several rock bands in his native Idaho, singer/songwriter Justin Ringle moved to Portland, OR in 2004 and began focusing on acoustic music, playing open mics regularly under the moniker Horse Feathers. In 2005, multi-instrumentalist Peter Broderick heard a couple of Justin's demos and offered to help flesh them out. In February 2006 the duo went into Skyler Norwood's Miracle Lake studios and recorded their debut album, Words Are Dead, which was released that September on Portland label, Lucky Madison.

Justin and the Brodericks returned to Miracle Lake studios in the fall and winter of 2007 and recorded House With No Home, which was released on Kill Rock Stars in the spring of 2008. Around that time, Peter left the country to pursue music in Europe, and Nathan Crockett was enlisted to cover violin duties. Several months later, Heather also left the group to pursue other musical projects and cellist Catherine Odell came on board. The current lineup was rounded out at the beginning of 2009 when Sam Cooper joined as a multi-instrumentalist. As a four piece, the group has been touring extensively and released a new album entitled Thistled Spring on Kill Rock Stars, April 20th, 2010.

So It Is With Us

House With No Home