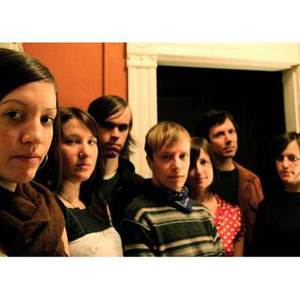 Long a popular fixture of the Portland music landscape, Loch Lomond effortlessly combines their symphonic nature with chamber-pop melodies. The six to nine performers orchestrate instruments to provoke a visceral experience that is both raw and emotional, weaving the distinct use of mandolin, theremin and saw along with the traditional indie instrumentation. Luring the listener with the unique range and power of his voice, Ritchie Young's vocal ability enables him to switch from fragility to thunder in the turn of a phrase.

Luring the listener with the unique range and power of his voice, Ritchie Young's vocal ability enables him to switch from fragility to thunder in the turn of a phrase. Yet, Young exercises the power of restraint, saving vocal tornadoes for emotional apexes, buoyed by the four-part harmonies, string section swells and rhythmic dynamics of the ensemble.

Drawing inspiration from the iconic Funky Church, a Portland venue that serves as a home to local artists and musicians , Loch Lomond utilizes this space to nurture their music in a way only a high-domed ceiling and absent sound system can convey. In conjunction with the cathedral's influence, Ritchie Young calls on inspiration from within to infuse his creativity. "My internal inspiration comes out of me in strange ways," says Young. "I lock myself in a room until I scream, knock stuff over, whatever I'm compelled to do to make a song emerge. Once a song does come out of me, I leave it alone. Changing the structure or the lyrics would feel like I was second-guessing my art."

There are no half measures with Loch Lomond. This group remains a long respected, gathering force that brings their tidal waves of sound to a much wider audience by immersing itself in a myriad of trained musicians. Ritchie explains, "It was a very slow process of finding the right people that fit. I say this in the most humblest of ways. Amanda Lawrence for example was at a show we were playing and her husband leaned over to her and said 'This is the band you need to be in; this is what you have been looking for!' She gave Peter Broderick a call and the next week she was playing with us and she fits so well."

The third official recording from Loch Lomond, Paper The Walls, evokes an emotional response to deeply imprint itself on the listener with songs comprised of gently narrated stories unraveling with rustic charm; simple in form, but saturated with tone and texture. Recorded at Portland's Type Foundry (M Ward, The Decemberists) and their second release from Hush Records, the album is rich with detail while retaining an uncommon sense of space.

Little Me Will Start A Storm

When We Were Mountains