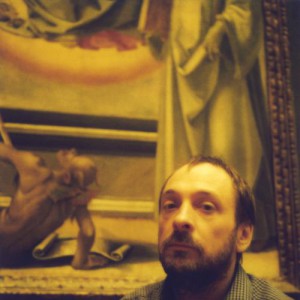 Vic Chesnutt (November 12, 1964 - December 25, 2009) was a singer-songwriter and multi-instrumentalist living in Athens, Georgia, United States. Around 1985, Chesnutt moved to Athens and joined the band, The La-Di-Da's. After leaving that group he began performing solo on a regular basis at the 40 Watt Club; it was there that he was spotted by Michael Stipe of R.E.M.; Stipe produced Chesnutt's first two albums, Little (1990) and West of Rome (1991).

Around 1985, Chesnutt moved to Athens and joined the band, The La-Di-Da's. After leaving that group he began performing solo on a regular basis at the 40 Watt Club; it was there that he was spotted by Michael Stipe of R.E.M.; Stipe produced Chesnutt's first two albums, Little (1990) and West of Rome (1991).

In 1992 Chesnutt was the subject of a PBS documentary, Speed Racer. He also had a small role in the 1996 Billy Bob Thornton movie Sling Blade which he later described self-mockingly as a poor performance.

In 1996, Chesnutt was exposed to a wider audience with the release of the tribute album Sweet Relief II: Gravity of the Situation, the proceeds from which went to the Sweet Relief Fund. The album consisted of Chesnutt covers by famous musicians including Garbage, The Smashing Pumpkins (with Red Red Meat), Madonna, R.E.M. and Live.

He has several times recorded with other groups and artists. Most notably he has made two albums with fellow Athens, GA recording artist Widespread Panic, under the name of Brute. Chesnutt's album The Salesman and Bernadette (1998) was recorded with alt-country group Lambchop as the backing band. The album Merriment was a collaborative effort between Chesnutt and Kelly and Nikki Keneipp, with Vic writing and singing the songs, and the Keneipps playing the music. The 2005 album Ghetto Bells features famed guitarist Bill Frisell, whom Chesnutt met in 2004 at the renowned Century of Song concert series at the German festival RuhrTriennale. Chesnutt's wife, Tina Chesnutt, frequently plays bass on his albums. His niece, and fellow songwriter, Liz Durrett also appeared on the Ghetto Bells album.

Chesnutt's first four albums were released on the independent Texas Hotel label. He then recorded About to Choke (1996) for Capitol, which was his first and only major record label recording. The Salesman and Bernadette (1998) was on Polygram; Merriment (2000) was on the Backburner Records label; SpinART was the label for the self performed and recorded Left to His Own Devices (2001). Vic then found a new home at the New West Records label, who have released two albums for him so far. In 2004 New West also re-released the early Texas Hotel recordings, including expanded liner notes and extra tracks.

In the winter of 2006, he recorded his newest album, North Star Deserter at the Hotel2Tango in Montreal. It was released on September 11, 2007 by Constellation Records. The record includes contributions from Constellation artists Thee Silver Mt. Zion Memorial Orchestra & Tra-La-La Band, members of Godspeed You! Black Emperor, as well as Fugazi's Guy Picciotto. The album was produced by documentary filmmaker Jem Cohen. He also appeared as a guest musician on Cowboy Junkies' 2007 album Trinity Revisited, a 20th anniversary edition of their classic album The Trinity Session.

On Dec 25th 2009, Vic Chesnutt died after falling into a coma following a suicide attempt.

Left To His Own Devices