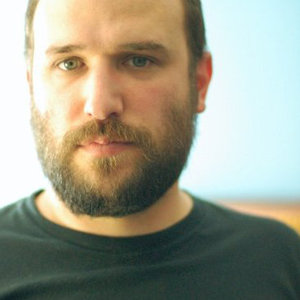 David Bazan (born January 1976) is an indie rock singer/songwriter from Edmonds, Washington. Bazan (pronounced "buh-zahn") was the lead singer and creative force behind the now-defunct band Pedro the Lion and was the lead singer of Headphones, a band he formed out of his interest in synthesizers. He then released an album under his name, David Bazan. Collaborations In the early 90's he played drums in the band The Guilty (later named Coolidge) with fellow songwriter Damien Jurado.[1] Bazan had attended Shorewood High School with Jurado.

Collaborations
In the early 90's he played drums in the band The Guilty (later named Coolidge) with fellow songwriter Damien Jurado.[1] Bazan had attended Shorewood High School with Jurado.

In 2002, he played drums and sang backup vocals for Seldom; in 2004, he played with Starflyer 59. Bazan has made various studio appearances with Seattle-based bands; for instance, he played drums in 1998 on Unwed Sailor's Firecracker EP[2], and contributed to the Rosie Thomas album These Friends of Mine.

Bazan is a personal friend of comedian Horatio Sanz,[3] and performed at Sanz's 2006 Christmas show, The Ho-Ho-Horatio Christmas Special, at the Upright Citizens Brigade Theatre in New York City. In 2007 he did a Take-Away Show acoustic video session.

Bazan has worked with artist manager Bob Andrews of Undertow Music Collective since 2004.

Recent projects
Bazan recorded his first solo project, the EP Fewer Moving Parts, in between touring as a member of The Undertow Orchestra. The EP was released on 13 June 2006. Bazan recently finished a nationwide solo tour featuring Ben Gibbard of Death Cab for Cutie and Johnathan Rice and also contributed a cover of the song "Let Down" to Stereogum's "OK X"[4] project, a tribute to the Radiohead album OK Computer. A full length debut album with his new band "David Bazan's Black Cloud" is in the works for early 2009; it will be released by Barsuk Records.[5]

On September 5, during an interview with Minnesota Public Radio, Bazan mentioned his next album will be played entirely by him and he will recruit friends to play live when he tours. The album, 'Curse Your Branches,' will be released in the spring and may include, "Please, Baby, Please," a song he debuted during the interview.

During his solo tour in September, Bazan has been playing seven new songs that will appear on his new album: "Please, Baby, Please", "Weeds in the Wheat", "Curse Your Branches", "American Flags", "Broken Arm", "The Stitches" and "Harmless Sparks."

A hidden page on Bazan's website was found by fans detailing an upcoming DVD release. The DVD is said to be interviews, intimate live performances filmed in his home studio, on his front porch, and while driving around in his Ford Bronco, Shot during two weekends in June and July in Seattle, WA.

On October 28th, 2008 Bazan released the album version of "American Flags" on his Facebook and Myspace pages in celebration of the 2008 election. It was made available for purchase on iTunes and other online vendors on November 4th, along with the version of "Please, Baby, Please" recorded for the DVD.