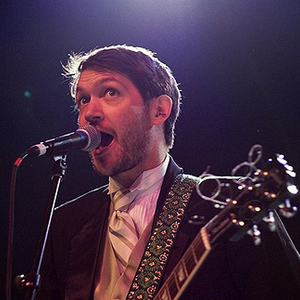 Tim Kasher is a musician from Omaha, Nebraska. He is the frontman of indie rock groups Cursive and The Good Life, both of which are on the Omaha based label Saddle Creek Records. Prior to those bands, Kasher was in a band called Slowdown Virginia. He also made a brief appearance with the Omaha band Commander Venus and The March Hares. Kasher has a very close relationship with Conor Oberst of Bright Eyes. They grew up in Nebraska together, went to the same Catholic high school, Creighton Prep. It is rumored that Tim taught Oberst to play guitar.

Kasher has a very close relationship with Conor Oberst of Bright Eyes. They grew up in Nebraska together, went to the same Catholic high school, Creighton Prep. It is rumored that Tim taught Oberst to play guitar. In the Bright Eyes song, "Nothing Gets Crossed Out" Oberst sings, "yeah Tim I heard your album and it's better than good. When you get off tour I think we should hang and black out together." (referring to the album Black Out by The Good Life, released in 2002 on Saddle Creek Records.) Furthermore, Oberst later sang backup on the song "Staying Alive," from Cursive's 2003 effort The Ugly Organ.

Kasher temporarily disbanded Cursive after the departure of guitarist Steve Pedersen (who left to pursue a law degree at Duke University. He now leads the Saddle Creek band Criteria). He married and moved to Portland, Oregon. According to interviews, Kasher went through a bitter divorce in 2000, which led to the regrouping of Cursive, as well as providing the inspiration for The Good Life album Black Out, and Cursive's Domestica.

The Good Life was originally planned to be a solo project. Kasher wanted to experiment with different types of lyrics and melodies. He released Novena on a Nocturn on Better Looking Records. He then recruited Ryan Fox, Roger Lewis and Stephanie Drootin into the band and released Black Out, Lovers Need Lawyers EP and Album of the Year.

Kasher created a another record with Cursive which was released in August 2006, entitled Happy Hollow. In 2009, Cursive released their latest effort, 'Mama, I'm Swollen'. The Good Life, despite a near breakup in late 2005, returned to the studio to release the album, 'Help Wanted Nights' in September 2007.

Under his own name, Tim Kasher recorded a song called "Stranger Than Strangers" which was released on a compilation CD called "My Favorite Songwriters." He released the solo album 'The Game of Monogamy' in 2010, and a follow-up disc of songs from that session called 'Bigamy', in 2011.

The Game Of Monogamy