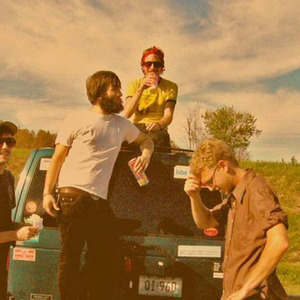 Bassist Christopher Dale Ryan and drummer Dennis Ryan became official members of Deer Tick in mid-2007 while guitarist Andrew Tobiassen joined the band in August 2008. Keyboardist James Falzone played with Deer Tick off and on from 2006 to 2007 and Paul Marandola drummed from 2005 to 2007.

The band began in December of 2004 as a drums and guitar duo. Within a few years the band developed into a quartet featuring two guitars, bass and drums, with three members singing and writing, and one writing string arrangements. They have released countless CD-Rs and two official releases, 2007's War Elephant (re-released in 2008) and 2009's Born On Flag Day.
-----------

Deer Tick began in December 2004 as a two-man drum and guitar band as a new vehicle for songwriter, and Providence, Rhode Island native, John Joseph McCauley III. After hearing a Hank Williams song on the radio, McCauley purchased as much Hank Sr. as he could at a record store, got his underage hands on a big bottle of brandy, and locked himself up in his cold and drafty bedroom listening to ol' Hank until the bottle was dry. It was a departure from the dissonant rock n roll scene that McCauley had been familiar with growing up in Providence. Alongside him was his best friend, Paul Thomas Marandola, on the drums. The two made some tapes, played a couple small shows, and tried to find a bass player.

The duo used the tentative band name My Other Face. This went on for a few months until Brendan "Viking Moses" Massei crossed paths with the 18-year-old McCauley, and infected him with the tour bug. Parting ways with Marandola, McCauley drove across country with Viking Moses, leaving his movie theater job and shitty apartment behind. McCauley, all by himself now, ditched the My Other Face name (because it sucked) and began pondering new stage names. Feeling that monikers were stupid, he imagined that he was in a band and that he should be thinking about band names instead.

The town was Bloomington, Indiana. It was the summer of '05. McCauley was now 19. McCauley and Massei went hiking around a state park where McCauley got a deer tick on his head. McCauley discovered the pesky arachnid on his scalp late that evening and, drunk, began freaking out. McCauley grew up in the city, but had taken numerous camping and fishing trips with his pops in areas of the northeast that are notorious for ticks. Still, he never got one until now. The name Deer Tick came to mind once McCauley calmed down and realized that this was really no big deal. From that day forward McCauley was now in a band called Deer Tick, he just had to find his band mates.

Playing with several incarnations over the years with help from all sorts of talent (Dirty Projectors drummer Brian McOmber, New Hampshire bassist and songwriter Nat Baldwin, Spencer Kingman of Spenking), McCauley found himself in love with the stylings of Pawtucket, Rhode Island drummer Dennis Michael Ryan. Ryan had played drums in many local bands that McCauley liked. It was May of '07, and seeing that Ryan was not doing much with his time, McCauley asked him to join his imaginary band Deer Tick to help bring his dreams to life. Ryan agreed, and to McCauley's surprise, this Ryan kid was a damn good singer and harmonist.

However, before Ryan's time in the band, McCauley had recorded War Elephant, and scheduled its release with short-lived Houston, Texas-based label Feow! Records. No current members of Deer Tick actually appear on that record (except McCauley of course).

The two Tickheads embarked on a very ambitious tour in the summer of 2007, covering the entire U.S.A. and venturing into new places like Canada. The tour was booked months in advance with the idea that Deer Tick would be supporting their first record. Delays happened, and then more delays happened, and the record was not released in time for the tour. Deer Tick enlisted the help of Las Vegas musicians Jacob Smigel and Joe Kendall for the first half of the tour, and Massachusetts born and bred pianist James Alphonse Falzone, Providence songwriter and guitarist Diego Perez, and the Washington D.C. rooted songwriter and multi instrumentalist Liz Isenberg on bass for the second half.

The second half of the tour became a financial disaster and morale remained low throughout most of it, especially during the final weeks. The Tickheads came home to Providence, their souls battered, not reminiscing much of their time on the road, instead drinking and abusing drugs in silence and behind closed doors.

Though not all was wrong with the tour. McCauley and Ryan met "Big Rob" (that's a whole 'nother story though) and McCauley spent his 21st birthday amongst very close friends in Austin, Texas. McCauley's birthday party show took many, many Hefty garbage bags to clean up after.

So now the band was back to basics again, just drums and guitar. This would not do. In the past, Deer Tick had featured Dennis' half-brother, Providence native, Christopher Dale Ryan (who will be referred to as C.R.), on bass, and the two wondered if they could rope him in full time. C.R. was one of the few guys around town with an upright bass, he was a hell of a player, and he played left handed, which looks cool. Arrangements were made to jam once C.R. returned from his VW Van adventure to Costa Rica and back (though legend has it that he only made it as far as Guatemala). At first C.R. was iffy about joining full time, but he agreed to come on tour in the fall to see how it went.

C.R. proved to be a great addition to the band, and his knowledge of classical music and jazz was very useful, as he could write string arrangements for the band. He studied music at Providence College for four years, graduating in the spring before joining the band.

War Elephant was finally released on September 4, 2007 on FEOW! Records. The reviews started coming in and Deer Tick started to get a bit more popular on a national level. Deer Tick was set to tour with Castanets in October to support the record. The record sold out by January and was not repressed. It became nearly impossible to find and Deer Tick was back to selling CD-Rs if anybody had time to burn them before the show. By the time the band made it to South by Southwest and their audiences across the country were getting bigger, the issue of not having an album anymore became quite an embarrassment.

Tim Putnam and Ian Wheeler, founders of Brooklyn-based Partisan Records, caught wind of Deer Tick and expressed interest in rereleasing the album. Deer Tick was all freed up and had nowhere else to go. Partisan Records was a godsend for the trio. The band was going to make their comeback!

In August of 2008 after returning home from a trip to Memphis, McCauley was looking for a guitar player to add to the band. C.R.'s new roommate, Florida-born Andrew Grant Tobiassen, played it pretty well and McCauley was curious to see if he could make the cut. The two spent many sleepless nights together playing guitar and working on songs. Like Ryan, McCauley was also thrilled by his singing abilities. McCauley made up his mind and hired Tobiassen just days before Deer Tick was scheduled to start a new recording session.

In September, just before the press were starting to talk about the rerelease (which caught 'em all by surprise with shocking new cover art), Deer Tick entered Yellow House Studios in Baltimore, Maryland. This was where McCauley did almost of his recordings in the past, including War Elephant and various Deer Tick demos. The time schedule was hectic, McCauley had just moved to Brooklyn, New York with the other three band members still living in Rhode Island, and the band as a quartet were underrehearsed. After a week or so of unproductive sessions, a panic-stricken Deer Tick got their act together, and in a span of 20 days recorded what they felt was nothing short of the perfect followup to War Elephant... absolutely perfect.

McCauley and the boys thought long and hard about prospective album titles. Flag Day in the United States is June 14, McCauley's birthday, which he shares with his beloved, departed Uncle Frank. As a testament to his roots, McCauley decided to go with the title Born On Flag Day... kind of like [album artist=Bruce Springsteen]Born in the U.S.A. meets Born on the Fourth of July, a great album and a great movie, respectively. Nobody could make any sort of disagreement on the title because late one night on a drive from Providence to New York City, the band was listening to the album, taking notes on the mixes, when suddenly a dark sedan with a vanity plate reading "JUNE 14" passed the Deer Tick Mobile (which at the time was a GMC Safari covered with stickers that would frequently get the band pulled over). The group totally lost their shit.

In support of the Partisan Records rerelease of War Elephant, the band hit the road again, this time opening shows for folks like Jenny Lewis and The Felice Brothers, and of course the occasional sold out headlining gigs in Providence and Brooklyn. But what would happen with Born on Flag Day? It had been over a year since War Elephant first hit the streets, and Deer Tick had nothing to show for all that time in between. (Well, they had a pretty sweet Daytrotter Session, and that goddamn Sean Kingston cover)

By Christmastime '08 Deer Tick and Partisan Records decided they'd stick together, and they began making arrangements for the release of Born on Flag Day, and for the band to do another studio session for a third record. So in January '09, with Born on Flag Day bearing a TBA 2009 release date, the band released a cover of the Paul Simon song "Still Crazy After All These Years" over the internet. This little gem, from their latest recording session, was released to keep the fans at ease while Born on Flag Day is given "the treatment".

So now, with two records pretty much ready to go, 2009 is shaping up to be what one might call "The Year of the Deer Tick". In 2009 Deer Tick will attack the music industry twice with two dope-ass records, finally as a quartet - the way John Joseph McCauley III envisioned it long before War Elephant.