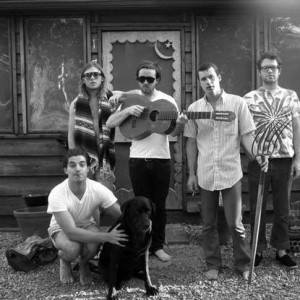 Delta Spirit is a band from San Diego, California, United States, beginning in 2005. "The raw spirit of indie rock. An amplified, rocking version of '60s protest folk. The soulful passion of the Violent Femmes and The Waterboys." All of these comparisons have been made in attempts to describe Delta Spirit, the southern California five-piece who might just be one of the most important new bands of the decade.

"The raw spirit of indie rock. An amplified, rocking version of '60s protest folk. The soulful passion of the Violent Femmes and The Waterboys." All of these comparisons have been made in attempts to describe Delta Spirit, the southern California five-piece who might just be one of the most important new bands of the decade. Each description contains elements of the truth, but the real answer to the question ?who is Delta Spirit?? lies within Ode to Sunshine, the band's captivating debut. The group's DIY ethic shines throughout the album, with songs honed razor-sharp over a year of non-stop touring across America. Opening sold-out tours for Clap Your Hands Say Yeah, Cold War Kids, and Dr. Dog, the band developed a riveting live show and gained a loyal following amongst tastemaker music fans, earning them invites to national festivals like Austin City Limits, Noise Pop and Sasquatch. So it would not be an understatement to call Ode to Sunshine one of the year's most highly-anticipated debuts. But don't take our word for it; in the words of Delta Spirit: ?If you're feeling what I'm feeling come on, all you soul searching people come on.?

Jonathan Jameson of Delta Spirit took a few minutes out of the band's busy touring schedule to answer a few questions about the band, their music, and Ode to Sunshine.

Where in California did the band come together? How did you meet?

We are all from Southern California. Brandon met Matt while he was singing and playing guitar by the train tracks in San Diego. The rest is boring.

Who plays what and sings? Do you trade off instruments on different songs?

Your songs are credited to the band as a whole. Could you describe how they come together? Are the lyrics collaborative as well?

Some of the songs have very infectious sing along melodies (like the ba ba ba's in ?People C'mon?). Do you envision your music as communal, for audiences to participate in as well as listen to?

Our music feels most at home when we play it with people as opposed to at people. There is a mystery to music played live. It brings us out of ourselves into something bigger, something beyond our individuality. Sometimes it happens, other times the songs are just songs.

You recorded Ode to Sunshine at a cabin in Julian, California, out in the desert east of San Diego. Did the isolation of the setting influence the vibe of the album (like say, Dylan and The Band's Basement Tapes)?

Your music has been compared to current indie rockers, '80s punk roots bands, and sixties folk rockers. Was there any music you listened to growing up, or that you listen to now, that you hear seeping into your current sound?

We were born in the '80s, grew up in the '90s and have parents from the '60s. We are proud of the bands that are making great music now. Maybe it's like the Waterboys covering Harry Nilsson or maybe a song by the Weavers at a rally, but on tour next month with Richard Swift. We want to be found in the lineage of honest and true music that has found its way through every current of music history.

There seems to be a conscience in the music, a sense of taking responsibility for ourselves, each other, and the world. What do you feel is special about this moment in history, and this generation, and the place of music and art in society? Are you encouraged by the energy you feel coming back to you from your audiences?

There is a feeling of possibility in our age. We feel that same possibility with our band. There is a deep connection there. We don't want to forget about the most important thing for us, which is simply making good music, but that does include being aware of what's going on in the world as well as what's going on in our own heads and souls. We aren't self-aggrandizing cock rockers or activist idealist hippies. We just want to be honest about ourselves and how we see the world, not minimizing the darkness or the hope, because both are very real.

Your original DIY version of Ode to Sunshine featured austere black & white artwork, while the new cover is much warmer, with the smiling face of Dr. Thomas Payne (an uncle of one of the band members) raising a toast while at a scientific convention on bark beetles. The Rounder release also features an additional song, ?Streetwalker,? which despite its somber subject features a Phil Spector / Brian Wilson groove. Do the new artwork and song show a new side to the band?

I think that before when we were looking at the album it felt kinda heavy to us and serious. About the big things in life. Like a dusty record of Kennedy speeches. But I think we realized that the true feeling of the album also included what we were feeling while making it and recording it and that those bits of summer and excitement and wonder break through every once in a while. It's as if after listening to those sobering speeches we found the pics of the Kennedys on vacation and now it all really made sense. The light and the dark. Sometimes you have to laugh at the serious stuff to be able to do something about it.

From the opening Rubber Soul-esque acoustic guitars of ?Tomorrow Goes Away? to the saloon piano-over-grunge chords of ?Trashcan,? from the harmonica-driven protest waltz ?People, Turn Around? to the insistent surf rock drums of ?Children,? Ode to Sunshine perfectly captures the energy and hope of a new generation that's rising like a phoenix to change the world. And with Delta Spirit providing the soundtrack, this is one revolution you can dance to.

I Think I've Found It