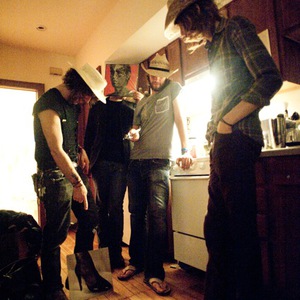 These United States is a musical group from Washington DC and Lexington, KY, founded in 2006. It's made up of songwriter and bandleader Jesse Elliott, pedal steel and electric guitarist J. Tom Hnatow, drummer and vocalist Robby Cosenza, guitarist and keyboardist Justin Craig, and bassist and vocalist Colin Kellogg. The band released two albums in 2008, one in 2009, and one in 2010, all via Colorado-based record label United Interests.

In the four years since their formation, TUS has played 700 shows across the United States, United Kingdom, and northern Europe, appearing at South by Southwest, CMJ Music Marathon, and Lollapalooza in the U.S., and the UK's Glastonbury Festival.

TUS' debut album, "A Picture of the Three of Us at the Gate to the Garden of Eden," was recorded by Elliott and producer David Strackany (known to the music world as Paleo) in Elgin, IL, Iowa City, IA, Washington, D.C., and Chicago, IL. The album features musical cameos by a large supporting cast -- notably, Saadat Awan, Dan D'Avella, Dave Hahn, and early TUS collaborator Mark Charles, now of Vandaveer. "Picture" was mixed and mastered by Chad Clark of Beauty Pill and T.J. Lipple of Aloha at Inner Ear Studios in Arlington, VA, and released on March 4, 2008. Track 'First Sight' had its UK debut on BBC Radio 6 on July 14, 2008, and the album as a whole enjoyed favorable reviews from The Austin Chronicle, Alternative Press, The Village Voice, and others.

"Crimes," the group's second album, was recorded in Lexington, KY at Shangri-La Studios, 6 weeks after the release of "Picture." It was produced and mixed by Duane Lundy, with co-production by Rob Gordon and These United States (by then composed of Elliott and full-time band members Charles, Cosenza, Craig, and Hnatow), and released on September 23, 2008. Paste Magazine, Pitchfork Media, National Public Radio, and others praised the album despite (and in many cases because of) its sonic departure from the group's debut. These United States recorded live sessions and interviews for All Things Considered, Daytrotter, and WOXY.com, as "Crimes" reached #30 on the College Music Journal Top 200 radio chart in late 2008.

In February 2009, TUS recorded its third album, "Everything Touches Everything," at Inner Ear Studios, with T.J. Lipple this time taking on the role of producer. Released September 1st of that year, the album proved TUS' most energetic and upbeat to date. SPIN Magazine sang its praises ("captures the overwhelming jolt of simply being alive...swings between a sleazy leer and a dreamy purr...deftly blurring the line between carnal and cosmic"), as Jon Pareles of The New York Times weighed in on the band's live show ("superb...equally at home with quiet, morose tales and galloping punky-tonk adventures...a rambunctious alt-country band with story-songs that are both tangled and aphoristic"). Influential DJ and music writer Bruce Warren, of public radio station WXPN, called These United States "one of indie-rock's -- no, make that American rock's -- best kept secrets."

Early 2010 saw TUS take a brief break from a relentless touring schedule to return to the studio -- this time to Sound Mine Recording in rural eastern Pennsylvania. The resulting 10 tracks, produced by Dan Wise and TUS' Justin Craig, and featuring vocals by Dawn Landes, will be released on July 20, 2010, as "What Lasts." The accompanying album tour will include supporting dates with Fruit Bats, Deer Tick, Langhorne Slim, and Bonnie Prince Billy.