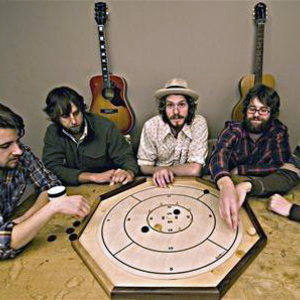 The timeless sound of the aptly named "The Deep Dark Woods" belongs to the depressing winters of the north. Pulsing with human warmth, these original songs echo through the lonesome night. Ryan Boldt's plainspoken lyrics offer a strong but gentle tone which understates poetry, oftentimes as startling as hot blood in fresh snow. Despite the dark themes, the heaviness never overwhelms the music's playfulness.

An utterly fun rhythm section, brilliant guitar work, and eerily rich harmonies drive the songs. One could easily be forgiven for mistaking their songs as treasures of decades past, as The Deep Dark Woods approach their instruments with studied respect for the honoured traditions of the shadowy side of roots music.

The Deep Dark Woods' newest release "Winter Hours" is a collection of their best recordings yet. Working with Juno award winning producer/musician Steve Dawson at "The Factory" in Vancouver, they managed to truly bring out an energy that the new songs deserved, recording the album live off the floor. What was created was an album full of raw emotion, sadness, beautiful vocals and harmonies, new sounds, and well thought out arrangements."Winter Hours" represents the ever changing sound of the band, and a step forward from their latest Black Hen release "Hang Me, oh Hang Me" (WCMA Nominated). "Winter Hours" recently won Best Roots Group at the 2009 Western Canadian Music Awards, and Ensemble of the Year at the 2009 Canadian Folk Music Awards.

The Place I Left Behind

Hang Me Oh Hang Me