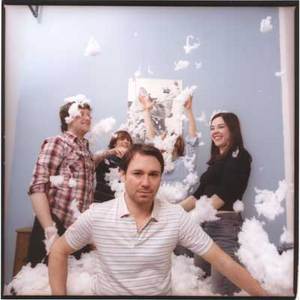 Matt Pond PA (usually written with lowercase letters: matt pond PA) is an indie band formed in Philadelphia, Pennsylvania in 1998 by singer/songwriter Matt Pond, along with guitarist/bassist Josh Kramer, violinist Rosie McNamara-Jones, cellist Jim Hostetter, and drummer Sean Byrne (previously of Lenola and The Twin Atlas). Matt Pond is the only remaining original member because the band had to reform when Pond moved to New York City. Their debut Deer Apartments gained them recognition in CDNow's Unheard? competition for unsigned artists that same year.

The band's music has been included in the soundtrack for the FOX television program The O.C., specifically cover versions of Oasis' "Champagne Supernova" and Neutral Milk Hotel's "In the Aeroplane Over the Sea."

As of late 2007, the lineup consists of Matt Pond on vocals and guitar, Dan Crowell on drums, Steve Jewett on guitar, Matthew Daniel Siskin on bass, and Chris Hansen on keyboards, guitar, and vocals.

The State Of Gold

If You Want Blood (EP)