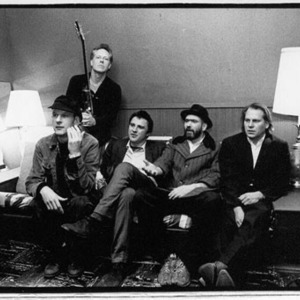 American Music Club (often abbreviated AMC) is a San Francisco-based band led by singer-songwriter Mark Eitzel. They've been recording and playing in SF clubs since the mid 1980's, showing a remarkable longevity for a band that has been far more critically acclaimed than financially successful. Although born in California, frontman Mark Eitzel spent his formative years in Great Britain and Ohio before returning to the Bay Area in 1980.

Although born in California, frontman Mark Eitzel spent his formative years in Great Britain and Ohio before returning to the Bay Area in 1980. After a brief stint with the punk band The Naked Skinnies he founded American Music Club in 1983 with guitarist Vudi, bassist Dan Pearson, keyboardist Brad Johnson, and drummer Matt Norelli. This lineup would change over the next several years but Eitzel always remained the core of the band in terms of its vocals, lyrics and thematic focus.

Their 1985 debut, The Restless Stranger, offers a rough outline of their increasingly eclectic sound and firmly established Eitzel's worldview, a harrowing vision of life as seen through the bottom of a shot glass. 1987's Engine honed the formula: the addition of producer Tom Mallon as a full-time member expanded the group's sonic palette.

American Music Club earned a solid cult following on the strength of 1988's California. Their next LP, 1989's United Kingdom, appeared only in the nation which lent the record its name and consisted of leftover material and live tracks.

In 1991 American Music Club emerged with the record that is widely considered their masterpiece, Everclear. Critical acclaim attracted the attention of several major labels. Eventually AMC -- now consisting of Eitzel, Vudi, Pearson, multi-instrumentalist Bruce Kaphan, and drummer Tim Mooney -- signed with Reprise in the U.S. and Virgin throughout the rest of the world.

1993's Mercury followed and, despite positive reviews, Mercury fared poorly on the charts and earned virtually no recognition from radio or MTV. In 1994, AMC issued San Francisco, an erratic collection which balanced confessional tunes like Fearless and The Thorn In My Side Is Gone alongside slick pop constructs. Like Mercury, the record found critical acclaim yet foundered commercially and American Music Club disbanded as result.

Eitzel eventually explored a solo career, and purchased a Pro-Tools set up to record solo material, some released through Reprise and other albums through Matador. Vudi joined Swans for their last album and farewell tour, documented on Swans Are Dead (Black Disc)/Swans Are Dead (White Disc).

In 2003, American Music Club reunited to record a new album, Love Songs For Patriots, which was described by reviewer Mark Deming as "a stronger and more coherent effort than the group's last set, 1994's San Francisco, and while it's too early to tell if this is a new start or a last hurrah for AMC, it at least shows that their formula still yields potent results. Here's hoping Eitzel and Vudi have more where this came from."