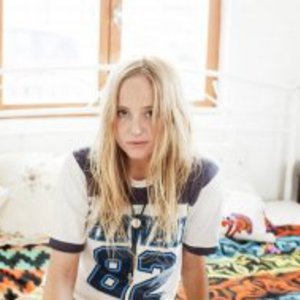 Elisabeth Maurus (born 1982), known by her stage name Lissie, is an American folk rock artist and Paste Magazine's #1 best new solo artist of 2010. She released her debut EP, "Why You Runnin'", in November 2009. Her debut album, Catching a Tiger, was released in June 2010. Lissie was born and raised in Rock Island, Illinois. Her father is a physician and her mother is an interior designer. She was interested in singing and music from an early age.

Lissie was born and raised in Rock Island, Illinois. Her father is a physician and her mother is an interior designer. She was interested in singing and music from an early age.She played the title role of the musical Annie at the age of nine. "In high school it seems like everyone has more drama than any other time in their life. So that was the time in my life where I really leaned on music as a way to stay sane," she said in an interview.

In her senior year of high school, she was expelled over, what she described, as "something stupid that [she] did, but it was sort of like the culmination of just a lot of negative things that had happened". She got her degree at an alternative outreach center. She spent two years at Colorado State University in Fort Collins, during which time she would open for musicians who visited the city. She collaborated with DJ Harry of SCI Fidelity Records on the song "All My Life", which was featured on television shows House, The O.C., Veronica Mars and Wildfire. After spending a semester in Paris, she finished her studies to pursue a career in music. In 2007, she produced a four-song EP that received some airplay on KCRW's Morning Becomes Eclectic.

In early 2008, Lenny Kravitz invited her to be the opening act for his Love Revolution Tour, after a friend tipped him about her MySpace page. Later that year, "The Longest Road", a song she co-wrote with DJ Morgan Page reached #4 on Billboard's Hot Dance Club Songs chart. "We met under that idea that he was going to remix a song of mine (...) But we decided to work on a new song together", she told the Quad-City Times. The Deadmau5 remix of the track was nominated for a Grammy in the "Best Remixed Recording, Non-Classical" category.

Her EP, "Why You Runnin'", produced by Bill Reynolds of Band of Horses, was released in November 2009 on Fat Possum. One of the songs, "Oh Mississippi" was co-written with Ed Harcourt, whom she met through a mutual friend. The EP was listed amongst Paste magazine's "Eight Most Auspicious Musical Debuts of 2009". In early 2010, she toured various venues in the United Kingdom supporting Ohio-born singer-songwriter Joshua Radin.

Lissie signed with Sony Music UK's Columbia Records. Her debut album, Catching a Tiger, was released on 21 June 2010. The album was recorded in Nashville in 2009 and produced by Jacquire King. The first single from the album, "In Sleep", was selected as Track of The Day by Q on 13 March 2010. A second single, "When I'm Alone," was released alongside the album; it would later be chosen by iTunes UK as their song of the year 2010.

In August 2010, her single "Cuckoo" was voted overwhelmingly to be the Record of the Week by listeners of expat radio station Heart FM Spain (www.heartfmspain.com), as a result of listener feedback, Lissie and the album "Catching A Tiger" was featured throughout the week of August 23 to 27. The single was also added to the "A" level playlist on BBC Radio 2 giving it around twenty plays a week on the UK's most popular station. The "Cuckoo" EP includes Lissie's live version of "Bad Romance" by Lady Gaga, which became popular online before being included on the release.

She appeared on the Great British Songbook on August 31, 2010, performing a cover of "Stairway to Heaven" that the host of the show, Simon Mayo, described as "breathtaking".

Her song "Little Lovin" is featured in the Season 2 promo for Justified on FX.

Lissie is featured on at least 4 or 5 tracks on Snow Patrol's album Fallen Empires, which was released in November 2011.

Her cover of Fleetwood Mac's 'Go Your Own Way' found prominence in early 2012, when it was used in the Twinings advert.

Just Because I Can (CDS)

Thank You To The Flowers

When I'm Alone: The Piano Retrospective