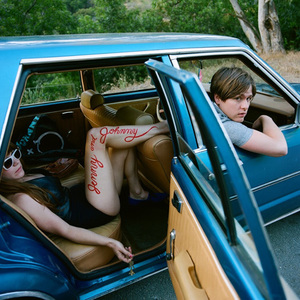 Jenny and Johnny (Jenny Lewis and Johnny Rice) first started working together in Los Angeles in 2005, after being introduced by Conor Oberst. Rice had traveled to Nebraska to make his first record before moving to L.A., where Lewis was beginning work with Mike Mogis on her solo debut Rabbit Fur Coat. They both ended up playing on each other's recordings, and struck up a lasting creative relationship.

Rice joined Lewis' band for the Rabbit Fur Coat world tour in 2006, and has played live with Lewis at every show of her solo career thus far. Jenny contributed both songwriting and singing to Johnathan's Further North in 2007, and he was quick to return the favor as one of the producers of Lewis' album Acid Tongue and again joining her on the road. During the Acid Tongue sessions, the band cut the song ?Carpetbaggers? with Elvis Costello. The legendary songwriter was so inspired with the collaboration that he enlisted Lewis, Rice, their Acid Tongue crew, and the Imposters to help make one of his finest records of recent years, 2008's Momofuku.

During hours of downtime on Lewis' Acid Tongue world tour, she and Rice began writing a batch of songs different from anything they had previously created. The material was fast, ultra-melodic, and often blended both of their voices into one, creating a completely new sound. When the tour wrapped in Japan in August of 2009, Jenny and Johnny were eager to record the new tunes. They enlisted Rilo Kiley's Pierre De Reeder to engineer a nine-day October session at his Bright Street Recorders in North Hollywood with the intention of making demos. Jenny and Johnny played as many instruments as possible, right down to the drums. Jason Boesel lent his considerable drumming talents to the songs that required something more. The four friends worked lightening fast, had a hell of a lot of fun, and were so stoked on the results that Lewis and Rice decided to start a new band and finish the record. Jenny and Johnny packed up a station wagon in December 2009 and drove to Omaha, Nebraska, the place where they first hung out all those years ago, to work with their friend, Mike Mogis.

Jenny and Johnny locked out Mogis' world-class ARC studios for five weeks of tracking, vocals, and mixing during the worst Midwestern winter since the 1860's. The front door of their guest house actually froze shut, so they used an alternate route to get to the studio every day. Cut off from the outside world in a blizzard's haze, the record's personality began to emerge. Gone were the vintage, classic-rock textures of their previous two albums, and in came a brand new sound which was tougher around the edges. The exuberance of love songs like Scissor Runner mask some of the record's darkness, with Lewis chronicling the economic demise of her beloved California in Big Wave, Rice's haunting vocal on Animal, and both songwriters raising a middle-finger kiss off in the acerbic My Pet Snakes. The overall result is genuine and original pop music for Right Now. This is not a Rilo Kiley record, a Jenny Lewis record, or a Johnathan Rice record. This is Jenny and Johnny. They're having fun now, and they want you to, too.