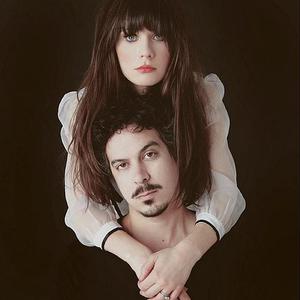 She & Him is an American indie folk band consisting of Zooey Deschanel (vocals, keyboards) and M. Ward (guitar, production). The pair first met in 2006 for a movie soundtrack project for the film 'The Go-Getter' in which they recorded a version of Richard and Linda Thompson's "When I Get To The Border?. Their first studio album, Volume One, was released in March of 2008 on Merge Records. Their second studio album, Volume Two, was released March 23, 2010, just over two years since the release of Volume One.

According to Merge, at their initial studio session the two ?were immediately struck by one another's talents and found an instant rapport". During a conversation about their shared love of old records, Zooey let slip that she wrote her own songs, which she recorded alone at home on her computer. Somewhat shy about sharing these musical morsels, she was eventually persuaded to send them to M. Ward. He was instantly impressed, and they soon reconvened at his studio in Portland to begin work. Recorded over a period of several months, between acting work (She) and touring commitments (Him), the pair found time to bring Zooey's fledgling songs to gorgeous fruition

Melt Away: A Tribute To Brian Wilson

He Gives His Love To Me (CDS)

A Very She & Him Christmas

In The Sun B/W I Can Hear Music (CDS)