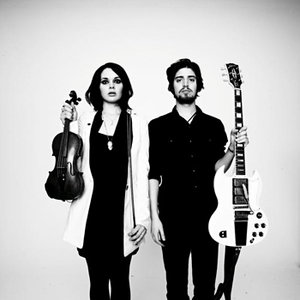 Honeyhoney is the jazzy, twangy, rollicking collaboration between vocalist Suzanne Santo and guitarist Ben Jaffe. Prior to joining the duo, Jaffe recorded music for TV and film; he then met Santo (an actress whose resume included stints on Law & Order and Blind Justice) through a mutual friend, who took Jaffe to see one of Santo's solo gigs. The two began holding informal songwriting sessions and soon discovered a musical partnership.

Adopting the name honeyhoney, they also discovered an early supporter in Kiefer Sutherland, who signed the band to Ironworks Music, a label he co-owns with musician Jude Cole.

Honeyhoney made their studio debut by issuing the Loose Boots EP in early 2008; the musicians then hit the road with Lifehouse (another band on the Ironworks roster) while finding time to work on their debut album. First Rodeo was released later that year, featuring varied influences that ranged from crossover jazz to neo-soul to engaging alt-country.