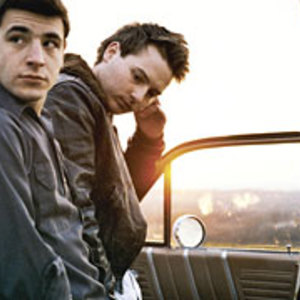 Turin Brakes are a modern folk pop duo comprising two friends Olly Knights and Gale Paridjanian, hailing from Balham, London, signed to Cooking Vinyl. Turin Brakes have often been compared to many of the New Acoustic Movement's bands spawned in the late 90's such as Elbow, Starsailor, I Am Kloot (who were a support band for Turin Brakes on their Ether Song tour) and the Norwegian band the Kings of Convenience.

Turin Brakes have often been compared to many of the New Acoustic Movement's bands spawned in the late 90's such as Elbow, Starsailor, I Am Kloot (who were a support band for Turin Brakes on their Ether Song tour) and the Norwegian band the Kings of Convenience.

Their debut album "The Optimist LP" (2001) was nominated for the Mercury Prize that same year. In 2003 "Ether Song" got to #3 in the UK album charts and spawned a Top 5 single "Pain Killer". Further commercial success was not achieved. In 2005 "JackInABox" meant some sort of return to the first album, but this time with more production and a more diverse sound. Again the critics loved it, but the buying public seemed not to. It got to no. 9 in its first week (without a hit single - "Fishing For A Dream" got to #35), but had no further commercial success. This might have been the effect of the decision by the band and the record company to take the slow path (doing just a short UK tour and not doing as much promotion as they used to), so that Olly Knights (the singer) could also focus on his new family life.

In the summer of 2005 the boys toured the USA and Canada, followed by an acoustic tour taking the band to Germany, The Netherlands and Italy. 2005 ended with a longer acoustic UK tour, of which the closing night in the Palladium in London was recorded and released as a download only live album the day after. The album sold quite well on iTunes, riding the top of the download charts in several countries.

The band spent the first half of 2006 writing new songs, occasionally performing both new and old work at small gigs across the UK. The band did an intimate tour in November 2006 to try out new material. In January 2007 the band entered a small studio in London to record their 4th album with producer Ethan Johns. After three weeks the band took a break (on January 29th Gale's wife gave birth to a daughter), but the sessions were resumed several weeks later in a bigger studio (also in London). On the last day of March 2007 the band announced that they had finished the recording sessions, and recorded 17 songs.

The new album, "Dark On Fire", was released in the UK in September 2007, preceded by a download-only single "Stalker".

The band are releasing their 5th studio album in March 2010 titled "Outbursts".