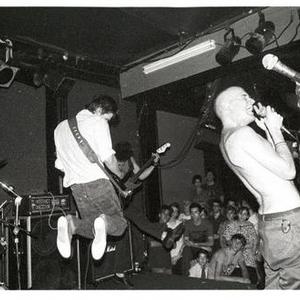 There is more than one artist with the name Embrace, the first two of whom are significant: 1) a five-piece indie band from Leeds, England, who have enjoyed significant success in UK, including three number one albums and six Top 10 singles 2) a Post-Hardcore/Post-Punk band from Washington D.C. that had a galvanizing influence on the Washington, D.C. punk scene of the 80's and featured Ian MacKaye (who subsequently formed Fugazi) 3) a Dutch Trance duo 4) a Canadian Gothic Metal band

1) Embrace are a five-piece band from Brighouse, West Yorkshire, in England who released their fifth studio album "This New Day" on the 27th of March 2006. They were also chosen to record the official England World Cup song. The band consist of brothers singer Danny McNamara and guitarist Richard McNamara, bassist Steve Firth, keyboardist Mickey Dale, and drummer Mike Heaton. The band have enjoyed six top ten hits in the UK, plus three number one albums.

2) Embrace was a short-lived post-hardcore band from Washington, D.C., often cited as pioneering the Revolution Summer movement and by extension indie pop/rock, from the summer of 1985 to the spring of 1986. The group was primarily noteworthy because of its well-known members, joining Ian MacKaye of Minor Threat and The Teen Idles with guitarist Michael Hampton, drummer Ivor Hanson, and bassist Chris Bald, all former members of the pioneering band Faith. Hampton had also played in S.O.A. with Henry Garfield (later known as Henry Rollins). All four members had been involved in popular and influential bands in the nascent D.C. punk scene since the late 1970s. The only album released by the quartet was their self-titled album Embrace.

For hardcore icon MacKaye, Embrace represented a transitional project between the short and fast sound of his youth and the later melodic tones of his current work (after his often maligned Egg Hunt project with Dischord Records co-founder Jeff Nelson, and the Ministry crossover Pailhead). MacKaye eventually teamed up with former members of Rites of Spring to form the long-running punk outfit Fugazi, while Hampton earlier played with Fugazi's Guy Picciotto, as well as Embrace's co-producer Edward Janney, in One Last Wish. Bald moved on to the band Ignition, and drummer Ivor Hanson paired up with Hampton again in 1992 for Manifesto.

3) Embrace is a new collaboration between dutch trance producers Ferry Corsten and Raz Nitzan, the latter best known as part of the vocal team Raz & Adrian.

4) Embrace is a Gothic Metal band from Toronto, Canada. They play a heavy, "doomy" version of Gothic Metal. Formed in 1994. They released an album titled "Coven the Eternal" in 1995.

Best Of Live From The Cellar Of Dreams CD2

Best Of Live From The Cellar Of Dreams CD1

Love Is A Basic Need

I Can't Come Down