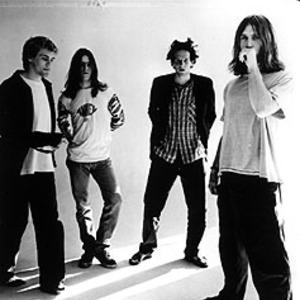 Although all of REEF have west country connections, especially to the Glastonbury area of Somerset, England, it wasn't until they all independently moved to London that the band was formed. In 1993 while Gary and Jack were looking for band members, Kenwyn had met up with Dominic Greensmith in London and discussed forming a band. So, the foursome got together, got a house in West London and started to jam.

In 1993 while Gary and Jack were looking for band members, Kenwyn had met up with Dominic Greensmith in London and discussed forming a band. So, the foursome got together, got a house in West London and started to jam.

After recording a couple of tracks, the band spent much of 1994 touring and building up a fan base. They signed to S2, an off-shoot of Sony and supplied them with "Naked" which was used in a TV advert for the Sony Minidisc in which a record company executive hears the track on Minidisc, throws it out of the window disapprovingly, but a young man outside picks it up, listens to it and likes it (demonstrating the format's durability). It would have been very easy for Reef to cash in on this and release Naked, although they would probably have gone the way of Stiltskin and been a one-hit-wonder. Instead, they took their time and a few months later, released "Good Feeling", then "Naked" and then a non-album track "Weird". All of these singles were top 20.

"We wanted our first album, ?Replenish', to be a really honest statement. Four people playing in a room and getting something that's totally their own. It was recorded in the most basic way possible. Minimal room sounds. Up until recently, all I used for effects was a wah-pedal and I only used that on two songs." Kenwyn House.

The follow up to "Replenish" was "Glow", which was more diverse, with the band using different instruments and creating a more interesting style. It spawned the hit singles "Place Your Hands", "Come Back Brighter", "Consideration" and "Yer Old" which increased Reef's profile in the UK and abroad. On the week of its release, "Glow" went straight to number 1 in the UK album chart.

In 1999 Reef released their third album "Rides". They have even swapped instruments on some tracks with Gary and Dom playing guitar and Jack singing on one song.

"Set The Record Straight" is the highlight of Getaway (Sony, 2000), their fourth album and most commercial work yet.

Place Your Hands remains a party and compilation favourite many years later.

They also headlined at the Reading festival in 1999.

In 2004 Reef took a long break from their constant touring.

Gary appeared at Bristol Academy as a guest DJ on the 28th of February.

Gary and Jack play in rock band THEM IS ME

In Motion (Live From Hammersmith)

Together: The Best Of