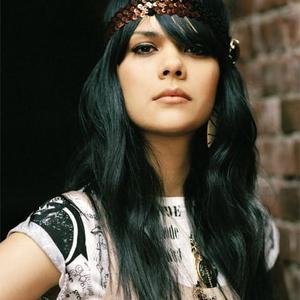 Bat for Lashes is the work of British singer-songwriter, multi-instrumentalist & visual artist Natasha Khan. Natasha Khan was born in Hertfordshire, England on 25 October 1979 and currently resides in Brighton, England, United Kingdom. Khan graduated in music and visual arts; while at university her experimental work was influenced by artists such as Steve Reich and Susan Hiller, and she produced multi-media work centred on sound installations, animations and performance.

Natasha Khan was born in Hertfordshire, England on 25 October 1979 and currently resides in Brighton, England, United Kingdom. Khan graduated in music and visual arts; while at university her experimental work was influenced by artists such as Steve Reich and Susan Hiller, and she produced multi-media work centred on sound installations, animations and performance. She went on to work as a nursery school teacher, and it was during this period that she began writing the material for her first album. "Whenever I'm writing music it's a very visual place in my mind," said Khan. "It has a location full of characters and colours and landscapes, so those two things really complement each other, and they help the other one to blossom and support the other. They are like brother and sister."

Her debut single, "The Wizard," was released digitally through Drowned in Sound records and on seven-inch vinyl through Khan's own imprint, She Bear Records. She then signed to the record label Echo, alongside Feeder and former Moloko singer R&oacute;is&iacute;n Murphy, and released her debut album, Fur and Gold, on 11 September 2006. In 2007, Bat for Lashes parted company with Echo and signed to Parlophone records. Fur and Gold was re-released with the addition of bonus material. A limited vinyl version was released by Los Angeles indie label, Manimal Vinyl in May 2007.

Bat for Lashes' music has been likened to the work of Bj&ouml;rk, PJ Harvey, Annie Lennox, Tori Amos, Fiona Apple. Her album Two Suns has been compared to the work of Stevie Nicks, Dolores O'Riordan and Fleetwood Mac.

In 2007, Bat for Lashes appeared at Glastonbury and toured the United States. On 17 July, Fur and Gold was announced as one of the albums nominated for the 2007 Mercury Prize, losing out to Klaxons' Myths Of The Near Future despite being a favourite of British media to win the award.

Also in 2007, the American Society of Composers, Authors and Publishers (ASCAP) awarded her with the ASCAP Vanguard Award and chose her to perform at ASCAP's prestigious "ASCAP Presents..." showcase at South by Southwest in Austin, Texas.

She came to prominence in 2008 for her distinctive music video for "What's A Girl To Do."

Thom Yorke and M.I.A. have previously complimented her work, Bj&ouml;rk was also spotted at her early gigs. Radiohead's 2008 tour featured several shows with Bat for Lashes as their opening act.

Bat for Lashes appeared on Manimal Vinyl's tribute record Perfect As Cats: A Tribute to The Cure. She covered "A Forest," which was originally a single by The Cure in 1980.

Bat for Lashes released her second album Two Suns in April 2009, with the song "Daniel" released as the first single in March. On 23 February, Khan revealed in an interview on radio station XFM that the cover for the single had been shot on Brighton beach, near her home. She also designed a limited edition cover for Fact Magazine which coincided with an interview she did for them.

In April 2009 she appeared on BBC Radio 1's Live Lounge. She performed an acoustic version of the single, "Daniel," and also covered "Use Somebody" by Kings of Leon.

Her first appearance on US broadcast television was 1 May 2009 on The Late Show with David Letterman, performing the song "Daniel".

On June 13, 2012 she announced the title of her upcoming third studio album "The Haunted Man" it is set to be released this October.

All Your Gold (CDS)